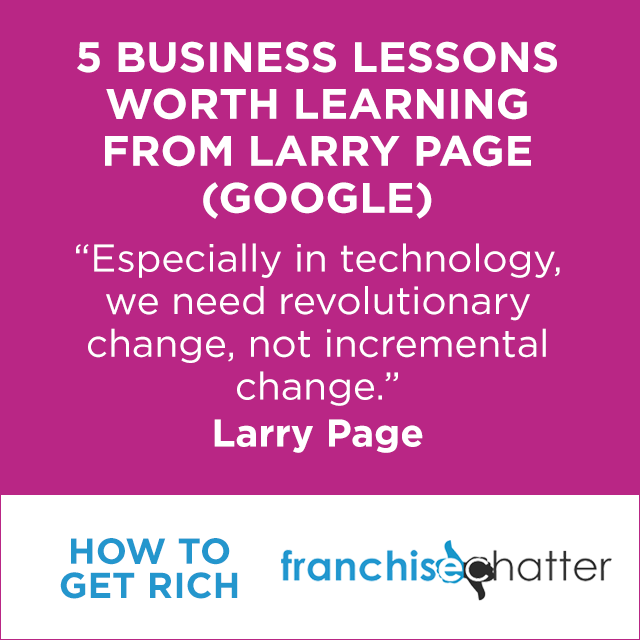 Larry Page had the idea in 1995 that web URLs were essentially like academic citations (he was just getting started on his PhD in computer science at Stanford University at the time) and realized that if he could figure out a way to count and qualify all the backlinks between URLs, then the web would be a more useful place.

With the help of his new friend Sergey Brin, they figured out the PageRank algorithm that they then realized could be used to build a search engine far better than any other.

The first version of Google was made available through Stanford’s website. In 1998 the friends co-founded Google, Inc. together. Less than 20 years later, Larry Page is the CEO of Google and has a net worth of just over $31 billion.

Here are five lessons to learn from him:

Page is not fond of traditional management. He’s more interested in hiring fantastic people who just naturally do the right thing for the company. For a long time Page insisted on being involved in nearly every hiring decision. Obviously that was only feasible for some amount of time in the early years (the company now has upwards of 50,000 employees). As Page himself puts it, “We don’t have as many managers as we should, but we would rather have too few than too many.”

Does it pay off? According to a 2011 article on Fortune.com soon after Page became CEO, three of the six people recently promoted to lead Google’s major product divisions are among the first 10 or so employees the company hired, dating back to 1998.

None of those people need to work – they’re all more than wealthy enough to give it up. They want to work because they believe in the company and what it’s doing. Now those are good hires!

Page thinks incremental change is for the birds. He wants to go for the totally audacious ideas that would really turn things upside down for the better if they panned out. Sometimes they do and sometimes they don’t. Sometimes an idea that doesn’t pan out morphs into something else that becomes incredibly successful.

Take, for instance, the Google group that was working on artificial intelligence. That didn’t pan out, but they did come up with an ad targeting system that ended up accounting for half the company’s revenues. Not bad for what was essentially a misfire, right?

Part of what’s great about thinking big is that it’s going to attract some of the best and brightest people who are looking for a challenge, and that’s always a good thing. If what you’re doing really strikes people as crazy, you probably won’t face a lot of competition, at least at first.

At first this one seems to run counter to the previous, but in reality they are complementary. Yes, you want to have a huge focus on ginormous disruptive innovation in terms of developing new products or services. However, once that new product or service has been successfully launched, Page is all about making sure people keep tinkering with it to add new features and make small improvements that enhance usability.

That happens to be a great way to keep customers engaged and loving your company.

Page had the initial idea for Google’s book digitization back in the mid 1990s. It took him six years after co-founding Google before the first book was scanned as part of the project in 2004. The same thing applies to the idea of “street view” on Google Maps.

This is a theme you’ll find running through the lives of nearly every highly successful entrepreneur – so much so that to put it in every article would become overly repetitive for readers. But it’s worth expanding on it here and now.

The most successful entrepreneurs display a dogged persistence about two things: Pursuing what is best for their company (and not themselves), and making sure that their company pursues things for which they themselves feel deep passion. When the company is devoted to something for which you have passion, then you have the opportunity to set your ego aside and make every decision based on what’s best for the company.

Leveraging its technology into the most profitable advertising methodology the world has seen by having ads selected in real-time based on search terms – that’s just brilliant, both in terms of the technology and the business strategy.

For three years in a row, Apple was considered the most valuable global brand. That changed this year, with Google taking over as the top-ranked brand. Google still trails Apple, however, in overall market valuation, with Google valued at just under $400 billion, while Apple is closer to $500 billion.

Larry Page has Google on what appears to be an unstoppable upward trajectory, and his own net worth of more than $31 billion should put him solidly on your list of “watch-and-learn-from” entrepreneurs.

Previous post: Why Invest: MOD Pizza Remains Relevant in a White-Hot Category By Cherry-Picking Select Partners to Participate in Its Franchise Plan