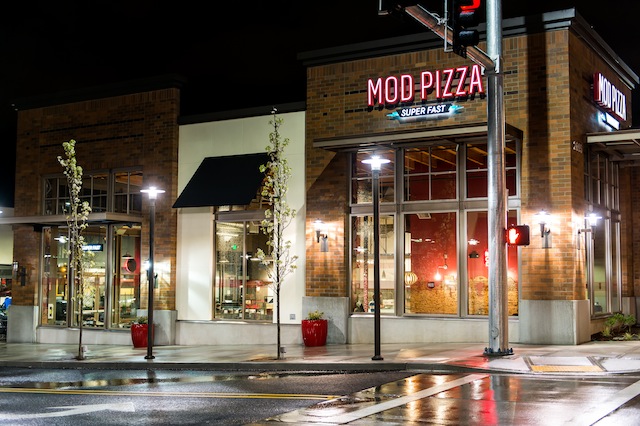 This Franchise Chatter report on MOD Pizza, a leading fast-casual custom pizza franchise, was written by Brian Bixler. Access to the full report is available to Platinum subscribers.

Just seconds into an interview with Franchise Chatter, answering the very first question, John Dikos, a relatively new vice president of strategic partnerships at MOD Pizza, interjects the word “culture” into the conversation. The unique culture at MOD was planned for discussion later in the interview, but Dikos’ immediate introduction of the topic speaks volumes about MOD Pizza and what it has determined to be its main differentiator from the growing number of custom pizza brands.

Shareholder and board member Jim Alling, former president of Starbucks and current chief operating officer of T-Mobile, describes it as the “people-centered culture” of the company.

As an example, Dikos mentions something as simple as ensuring managers will have two consecutive days off, a real “weekend,” even if those days off are during the week. That way they have a two-day period to relax and spend quality time with family. It rejuvenates them to return to work and puts them more in sync with the general working public.

“MOD is about so much more than just great pizza,” co-founder and CEO Scott Svenson said in a statement announcing the company’s latest plans for opening in the Silicon Valley. “It is about our desire to redefine and elevate the ‘fast food’ experience and to create a culture of putting people first—both customers and employees. This mission motivates our teams every day.”

In addition to its culture, MOD Pizza has a distinctive name among competitors in the fast-casual custom pizza space, because the public’s general concept of modern-day, or mod, pizza may undergo a big change as more companies join the fray of custom pizza brands. Modern pizza is modeled after a Chipotle burrito and those who are establishing a name in the fast-casual custom pizza category could well be reshaping how Americans enjoy one of their favorite foods.


The Chipotle model is one of the keys to the growth of the custom pizza category, allowing customers to walk a service line while they choose their own dough, sauce and myriad toppings fired quickly at high temperatures for speed and providing complete customization at a single price whether you choose a little or a lot.

MOD’s individual artisan-style pizzas are made on demand—a phrase that forms the acronym for the brand name—using organic, fresh-pressed dough and signature sauces. Customers can create their own pizzas and salads, using any combination of 30 featured toppings, or they can choose from a menu of MOD classics. MOD also serves local draft beers, wine, hand-spun milkshakes and house-made lemonades and iced teas.

With at least a dozen viable brands competing for market share and unit growth, and new companies added to the roster continually, the proliferation of new custom pizza brands is what caused Franchise Chatter to declare it the Hottest Franchise Concept of 2014. But there will eventually be a shakeout among the contenders, says IBISWorld franchise market analyst Andy Brennan.

In the meantime, leading brands like MOD Pizza are honing their marketing and business strategies with the common goal of becoming national brands. MOD may be one step ahead of the pack, having already been named one of the “Top 50 Breakout Brands” by Nation’s Restaurant News. 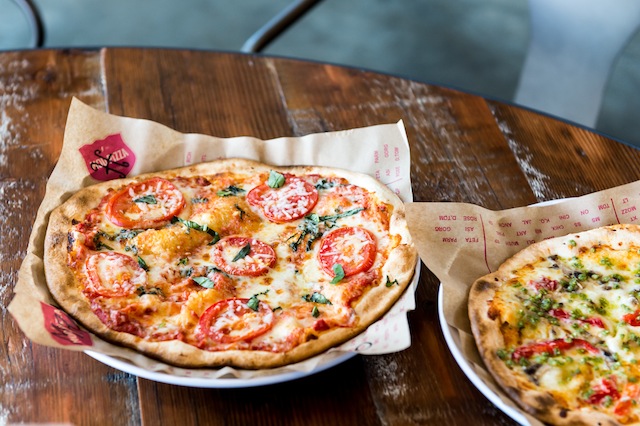 MOD’s founders include Ally and Scott Svenson, founders of the Seattle Coffee Co., along with investor James Markham, who eventually moved on to join a competitor, Pieology, in 2011, before establishing his own brand Project Pie.

Markham believes MOD Pizza was the very first fast-casual custom pizza concept in the Pacific Northwest. MOD still continues to brand itself as “the originator of the ‘build your own pizza’ concept” and, more recently, “the original super fast pizza concept.” Begun in 2008, it certainly has been around longer than many other leading competitors. In recent years, MOD Pizza has been working on a West Coast expansion, while growing the brand nationally.

Based in Seattle with 17 units currently, last year it moved into California for the first time with openings in Valencia and Irvine. It was one of several goals the company achieved in 2013. It also made its move into the Portland, Ore., market.

Plus, it strengthened its management and executive teams.

Between the Svensons (whose Seattle Coffee Co. was acquired by Starbucks), its shareholder and board member Alling being former president of Starbucks, plus the very recent recruitment of former Starbucks employees Brad Baker, as vice president of design and construction, Greta Pass as vice president of real estate, and Steve O’Neill as director of operations services, the successful coffee giant is well represented on the MOD Pizza team, which may be enticing to some investors.

“It’s not like we specifically go out and look for Starbucks (employees),” Dikos said, adding that the Seattle market is teeming with people of great experience and expertise gained while working for many extremely successful brands. MOD’s team of advisers and executives bring additional experience from iconic brands such as Apple, Panera Bread, Disney, Dunkin’ Donuts, McDonald’s and Schwartz Brothers Restaurants.

Using what he calls “franchise all-stars,” Dikos said the company is focusing on increasing the number of company-owned stores while working to enter new markets with very select franchisees, preferably with previous franchise experience. With a strengthened team in place, MOD Pizza also announced earlier this year that it has raised more than $15 million from private investors to support an accelerated expansion of the brand. The total capital raised to date by MOD now exceeds $26 million.

The custom pizza purveyor is not only expanding in existing markets such as Seattle and Los Angeles, it has already opened a unit this year in Phoenix, Ariz., the first in that state, which will be followed shortly by another one in the San Francisco Bay Area/San Jose. And a Houston unit will be open by the end of the summer, Dikos said, reiterating the company goal to more than double its 17 company-owned stores in Washington, Oregon, California and Arizona to have 35 stores open in seven markets by the end of 2014.

Dikos is a fairly recent addition to the MOD Pizza team. He, too, has a wealth of experience building a brand from his long stint with Qdoba Mexican Grill. He studied finance at the Perdue School of Business at Salisbury University in Maryland before co-founding Capital Avenue, an online commercial lending company, which was eventually acquired by National Cooperative Bank. He worked within the small business lending unit and newly formed franchise financing group of NCB, where he focused on the restaurant segment.

Dikos held several leading positions with Qdoba and was employed during some ups and downs in that company’s history, particularly since it is a direct competitor of the juggernaut called Chipotle. Qdoba experienced significant store closings and same-store sales declines during some of Dikos’ tenure, but he hastens to add that Qdoba is still the leading burrito franchise in the country and it grew from 300 to 600 units while he was employed there. “Very few brands get to go through that kind of growth,” he said.

While Qdoba has an excellent product, he said, it might have failed in marketing when it started going head-to-head with non-franchised Chipotle, one of the most successful restaurant brands of the last decade. Dikos brings lessons learned from his years at Qdoba to MOD with the goal of seeing his new employer go through the same phenomenal growth as his former one.

When Dikos was hired last year, Steven Svenson issued an emphatic statement that MOD Pizza would invite a select number of experienced operators to build MOD into a national brand. “While we plan to be very selective when choosing our partners, we do anticipate swift growth,” Svenson said.

The corporate management team will continue to grow company stores across the country, concentrating first on targeted markets to enter.

“For this team, the thought was ‘we really want to be sure we refine something before we grow it,'”Dikos said.

Next post: How to Get Rich: 5 Business Lessons Worth Learning from Larry Page (Google)