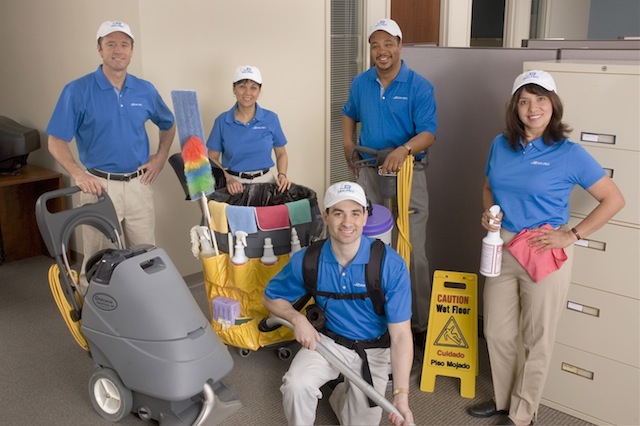 After a brush with the revenue-reducing recession, the commercial cleaning franchise sector is showing signs of recovery that should last for the next five years, and it’s a category that can still offer investors a fair return with brands that have been ranked as some of the most desirable home-based, low-cost franchises.

That’s the conclusion one could draw from the 2014 Entrepreneur Franchise 500 list as well as an IBISWorld market research report, Janitorial Services in the U.S., that was updated earlier this year.

“The Janitorial Services industry will encounter promising conditions over the five years to 2019, due to an expected upswing that will be caused by the recovering economy,” the IBISWorld report states. “Operators will consequently benefit from the anticipated recovery in nonresidential construction and other industries that outsource cleaning activities.”

Moderate industry growth during the past five years helped to offset revenue losses during the recession, even though cost-cutting measures for cleaning services by some businesses meant a downturn in contracts. That—coupled with increased office vacancy due to business closings or cautious investors hesitant to launch new enterprises when the economy was in a tailspin—took a chunk out of the commercial cleaning business, particularly in 2009 when industry revenue fell 6 percent.

Since then, moderate gains have resulted in a clean slate for the industry to begin building steady growth again with industry revenue forecast to increase at an average annual rate of 2.2 percent to reach $58.1 billion in 2019. With office vacancy rates falling again and more new businesses being added to the economy, industry revenue is projected to grow 2.9 percent in 2014 alone, according to IBISWorld.

Investors interested in cleaning franchise opportunities should understand that systems in this industry can be quite different from those in other sectors. Commercial cleaning companies tend to operate on a master franchising system in which a master franchisee controls a territory and seeks unit franchisees who execute the actual work.

A master franchisee takes on the responsibility of recruiting, training and providing ongoing support to each franchisee he or she signs. A development schedule, which might also include some of the master franchisee’s own units, results from a mutual agreement between the area developer and the corporate leadership.

Master franchising can be employed for domestic or international expansion. The franchisor benefits from expanded brand recognition and the master franchisee receives a percentage of initial franchise fees and perpetual royalties. Candidates should have deep pockets and plenty of management experience; these are not cheap franchises. The more affordable agreements are signed by the unit operators under the master franchisee.

But there are critics of master franchising plans and lawsuits have been filed by so-called unit owners who consider themselves to be company employees rather than franchise owners in some instances. In a recent case, an attorney for the plaintiffs (the unit franchisees) contends that the company misclassifies its janitorial work force as franchise owners as a way of avoiding unemployment insurance, workers comp, social security and payroll tax obligations.

Despite the way they are structured, however, commercial cleaning franchises remain popular among those interested in affordable franchise opportunities. This year, when Entrepreneur magazine named its Top Low-Cost Franchises, half of the top 10 brands were commercial cleaners, including Jan-Pro Franchising International Inc. in the No. 1 spot. Start-up costs for the cleaning companies on the list range from $3,150 to $97,940.

Among the industry trends cited in the IBISWorld report are the following:

IBISWorld puts ABM Industries Inc. as the industry leader in janitorial services with a market share of 4.9 percent. ABM’s history dates back to 1909 when it was founded by Morris Rosenberg as a single-person window-washing business in San Francisco. Today, the janitorial segment pulls in the most revenue for the company (55.7 percent) while its other divisions help the company to bundle services, providing additional revenue from facility solutions (21.5 percent of company revenue), parking (14.3 percent) and security (8.5 percent).

In addition to being a market share leader, the company has also taken the lead in offering green services, including a Green Care program that employs eco-friendly products and methods. During the last decade ABM has also improved its operations and expanded its services by utilizing new technologies. It has also standardized its training programs and brought uniformity to its cleaning products.

ABM stands for American Building Maintenance, one of the firm’s first names. In recent years it has made a series of acquisitions to increase revenue and expand its client services, especially janitorial security through the purchase of Diversco Inc. In 2012, ABM purchased TEGG Franchise Operations including CurrentSAFE and continued diversifying by purchasing AirServ Corp., a facilities manager for airlines and freight companies.

While ABM may have captured the sector’s largest market share, Jan-Pro seems to have captured the attention of the franchise industry. For two consecutive years, it has been ranked the No. 1 commercial cleaning franchise by Entrepreneur, taking the No. 12 position on the overall 2014 Franchise 500. What might be even more intriguing to investors is that Entrepreneur also ranks Jan-Pro the No. 4 fastest-growing franchise, the No. 1 home-based franchise and the No. 1 low-cost franchise for 2014, most of which were honors Vanguard Cleaning Systems earned just three years ago. IBISWorld did not have market share data for Jan-Pro.

Jacques Lapointe founded the company in Providence, R.I., in 1991 and began franchising the following year, offering both master and single-unit franchises. Today, there are more than 100 regional offices and nearly 11,400 franchisees worldwide.

This summer, Jan-Pro was also part of a delegation of 14 American franchise concepts visiting the Philippines to explore market opportunities there. The franchise trade mission was organized by the U.S. Commercial Service, a government agency tasked to promote business between the two countries.

This venerable company, first established in 1969 by college student Jim Cavanaugh, distinguishes itself by being recognized as the world’s largest commercial cleaning franchisor, even though IBISWorld estimates its market share to be just 1.2 percent. According to the company website, there are more than 12,000 authorized franchisees in the Jani-King system and more than 120 regional offices in 20 countries. About 10,000 of the company’s franchises are in the United States, a number that has remained flat for the last five years as the company has been establishing its reputation as a global leader in commercial cleaning through international expansion.

The Addison, Texas-based company is also recognized as having one of the most affordable franchise cleaning opportunities, with initial start-up costs as low as $16,250, according to its website.

Jani-King also signed some important agreements during the last two years. In May 2013, it formed a national partnership with concert producer Live Nation to provide commercial cleaning services for the arena and entertainment venue market. Just this year, Jani-King forged an agreement to provide janitorial and environmental services for Select Medical Holdings Corporation’s more than 700 specialty hospitals and outpatient clinics.

IBISWorld expects aggregated revenue of about $625 million for Jani-King in 2014.

Formerly a public company, ServiceMaster is now owned by private equity company Clayton Dubilier & Rice LLC. With a global network of more than 7,300 company-owned, franchised, and licensed locations, the company has about 20,000 corporate associates with total employment levels reaching some 50,000 people. There are about 800 ServiceMaster Clean franchisees focusing on the commercial cleaning end of the business in the United States, Vice President of Market Expansion David Messenger told Franchise Chatter last year.

The janitorial services company differentiates itself from competitors by allowing its franchisees to grow their business, build equity, and then sell it or pass it on to a family member. Basically, it counters the master franchising plans that have led to bad blood between other commercial cleaning companies and their unit franchisees.

Another company estimated by IBISWorld to capture less than 1 percent of market share is DTZ. UGL Limited, formerly known as United Group Limited, is an engineering and property services company based in Australia, but its operations in the janitorial services industry are provided through the UGL services division, which operates in the United States through DTZ.

The company formerly operated under the Unicco Service brand, which it purchased in 2007. However, in 2011, UGL combined two of its operations under the DTZ brand, which has more than 17,000 employees in 61 offices throughout the United States and Canada.

Impressively, DTZ claims a 95 percent customer-retention rate and the company’s main clients are in the commercial, manufacturing, education, retail, financial and government sectors. Like its competitors, the company has expanded its green services. In January 2010, the company extended its eco-friendly service to its maintenance, landscaping, lighting and other operations.

DTZ has estimated annual revenues of $310 million from its U.S. janitorial services.

The website TopTenReviews.com ranks Office Pride No. 1 among commercial cleaning companies for its cleaning services, locations, features, help and support. It differentiates itself by offering a full menu of services, including window washing, carpet cleaning, floor stripping and buffing and other tasks.

In its review of the company, the website also notes that Office Pride specializes in floor cleaning with a number of services that include stripping, sealing and waxing floors, vacuuming and mopping. It also trains employees to buff, deep scrub and refinish floors. Deodorizing can also be part of the treatment, if necessary, while it removes spots on carpets or performs color repairs. Their floor care is much more advanced and thorough than many similar cleaning companies, according to the site.

Office Pride is guided by religious principles in its mission and how it treats customers. “Going the extra mile” is one of its core polices. With headquarters in Tampa, Fla., a city whose area development deal belongs to company founder and CEO Todd Hopkins, Office Pride announced this year its goal to expand in the Sunshine State. It also earned a coveted spot on Franchise Business Review’s ninth annual Top 200 Franchises list.

According to IBISWorld, the number of janitorial services companies in the United States will be approaching 1 million by the end of this decade. Other prominent companies in an industry valued at more than $52 billion include Vanguard Cleaning Systems, OMEX International and Anago Cleaning Systems.

As companies continue to jockey for larger market share and compete for the accounts of new businesses, the industry will remain highly price competitive with profit margins expected to increase only moderately from 5.4 percent in 2014 to just 6 percent in 2019, according to IBISWorld.

Interested in learning how to start an office cleaning business from scratch? Check out this helpful resource (affiliate link).