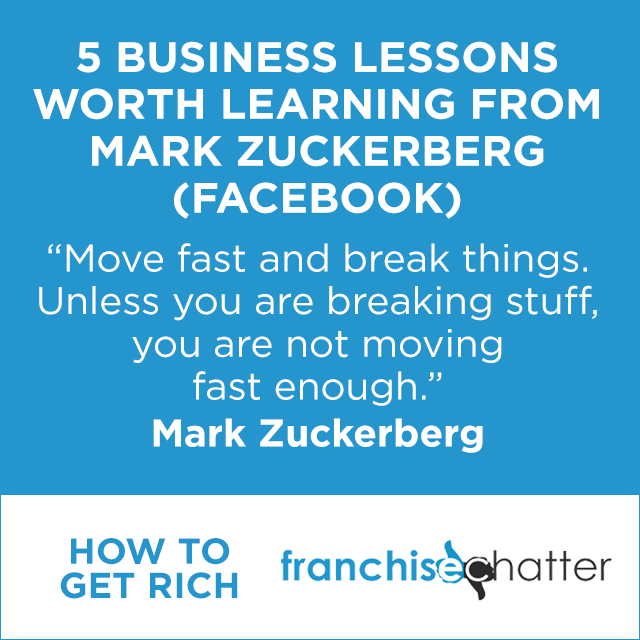 “Move fast and break things. Unless you are breaking stuff, you are not moving fast enough.” ~ Mark Zuckerberg

With a current net worth of just under $30 billion, Facebook’s Co-Founder, CEO and Chairman, Mark Zuckerberg, just turned 30 on May 14, 2014. And Facebook just turned 10 this year as well. While many have been critical of the young entrepreneur, there’s no denying that Zuckerberg’s leadership has carried Facebook through a tumultuous stock IPO to become a hugely successful social media company currently valued at $162 billion. Not bad for a 30-year-old entrepreneur, right?

Hollywood loves these kinds of success stories, so it should come as no surprise that The Social Network, a major motion picture about Facebook’s founding, grossed $22.4 million on its opening weekend back in October 2010. Zuckerberg was only 26 years old at the time of the film’s release. There is a lot to learn from a person who achieves so much that early in life.

Here are five critical lessons that Mark Zuckerberg learned as he scaled the heights of entrepreneurial success:

If your company’s mission statement is longer than a single, relatively short sentence, then you might just benefit from taking the time to narrow it down into the kind of laser-like focus seen in the mission statements of companies like Facebook and Amazon.


Interestingly enough, that current Facebook mission was tweaked significantly in 2008. It used to be the following: “Facebook helps you connect and share with the people in your life.” The differences are both subtle and profound at the same time.

The core goal is no longer getting people to make the connections – with 1.28 billion active users, that goal is achieved. The shift is to helping people figure out what to do now that they are more connected.

Something that comes up in nearly any article you read about Zuckerberg is his passion for what he’s doing. He clearly loves figuring out ways of helping people be more connected to each other.

To him, what he’s doing is every bit as important as the invention of the printing press or television. Those are both things that revolutionized how people communicate with each other, serving to bring people closer together even across great distances. When you put it that way, it really does feel pretty important, doesn’t it?

It’s that bigger picture of the value Facebook adds to the world that keeps Zuckerberg going on difficult days.

3. Stick to Your Guns

There’s probably a more politically correct way to say this one, but it would use at least twice as many words to convey the same sentiment. The idea here is that any time you’ve got a great idea, something that could really disrupt the status quo in a major way and move things forward exponentially instead of just incrementally, someone (or maybe even everyone) is going to try and talk you out of it, tell you it can’t be done, or call you completely nuts.

If you’re convinced about your idea, that’s all that really matters, so stick to your guns…in as gentle and non-violent a way as possible, of course. For Zuckerberg, this meant not canning the News Feed when it was introduced and everyone hated it. Now it’s among Facebook’s most beloved features. Go figure.

Ever wonder what incredibly wealthy people do with all that money besides turn it into more money and buy a lot of cool stuff along the way? The best among them become more philanthropically minded and give away a lot of money to good causes.

You might think this wouldn’t be the case with someone as young as Zuckerberg. You might expect him to still just be caught up in the rush of being so rich. Here’s the interesting thing: The Zuck has been surprisingly humble. He didn’t even start driving a fancy car until pretty recently. And he’s been ridiculously generous as well.

In 2013, he donated $990 million to charity, making him one of the top philanthropists that year. I bet you weren’t expecting to hear that about him, were you?

Find and recruit employees who complement your skills, who fill in your gaps and strengthen your weaknesses. And treat them well. But your dream team is more than just the elite executive team. It consists of every single employee throughout every layer of your organization. It includes strategic partners and people outside the organization as well, whether it’s retailers, distributors, suppliers or investors.

You have to be as strategic as possible about every partnership you form. Zuckerberg didn’t bring business acumen to the Facebook table, which is why he hired Sheryl Sandberg away from Google to be his COO. They form a very complementary pair – you can pretty much bet that Sandberg wouldn’t wear a hoodie to a VC meeting.

Mark Zuckerberg may seem a bit young for you to be taking lessons from him, but with a net worth of just under $30 billion, you might want to consider paying attention to how he got to where he’s at now. If that’s not enough, then Facebook’s 1.28 billion active users and overall valuation at $162 billion ought to more than make you sit up and take notice.