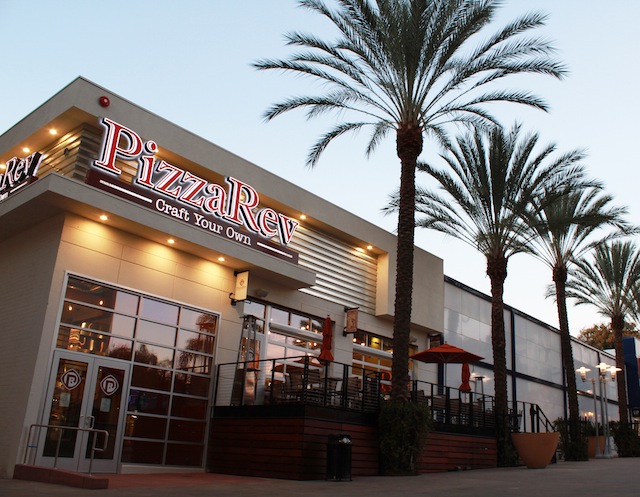 This Franchise Chatter report on PizzaRev, a leading fast-casual custom pizza franchise, was written by Brian Bixler. Access to the full report is available to Platinum subscribers.

At a recent trade show PizzaRev co-CEO Rodney Eckerman was asked why it took so long for the company to unveil its PizzaRev franchise plan. The former entertainment executive gave a quick response: Everything regarding PizzaRev, including the timing of its franchising program, is right on schedule according to a thoroughly conceived and hatched plan, he said.

He went on to school the curious questioner with some facts. For one thing, it hasn’t taken so long for PizzaRev to start its franchising operations, he reiterated in an interview with Franchise Chatter. The company launched its first location in Northridge, Calif., in April 2012 and by August 2013 it had announced its strategic nationwide franchising plan. By that time, Minnesota-based Buffalo Wild Wings, which is considered one of the biggest success stories in franchising in recent years, announced it would become a minority partner in the business, bringing strong financial backing for PizzaRev.

PizzaRev now operates 10 corporate stores in Southern California and Eckerman said the build-up of company-owned stores allowed the company to perfect its systems, attain exemplary staff members that would help the company grow, and achieve the solid financial backing that would allow the company to expand. The founders wanted all of those things in place before it started franchising. In May 2014, Buffalo Wild Wings opened the first PizzaRev franchise in Hopkins, Minn., a suburb of Minneapolis, with others on the drawing board for that market.

“From Day One we wanted a concept that was franchise-able,” Eckerman said. “We waited until we were ready: proof of concept, great systems and great personnel to put it in place.”

PizzaRev Is About to Pop

Consumers can now expect to see a profusion of PizzaRevs in all 50 states in a short amount of time. It currently has additional franchise locations under development in Minnesota, Utah, North Dakota, South Dakota, Nebraska, Minnesota, Missouri and California. Earlier this year, it announced agreements with four franchise companies for a total of 23 new PizzaRev locations. QSR magazine reported that PizzaRev is on pace to open 65 franchised and corporate locations across the country by the end of 2015.

PizzaRev is just one of many new chains in the fast-casual custom pizza category that prompted Franchise Chatter to name it the “Hottest Franchise Concept of 2014.” Others include Blaze Fast Fire’d Pizza, MOD Pizza, Pieology, Project Pie and Pie Five, among others. In the Franchise Chatter report, however, Technomic market research executive vice president Darren Tristano declared PizzaRev to be at the forefront of the fast-casual custom pizza concept that is spreading throughout the United States.

Often called “Chipotle-style” pizza, because it borrows many concepts from the fast-casual burrito restaurant, custom pizza restaurants generally allow patrons to choose their crust, sauce and pick from a wide variety of toppings for a pie that’s made exactly the way they want it. They move along a service line as they watch their pizza being created and popped into a super-heated oven for quick service.

One of the ‘Movers and Shakers’

To illustrate how PizzaRev has captured the attention of the franchise industry as well as the public, it debuted at No. 15 earlier this year on the annual Top 100 Movers and Shakers list by industry website Fast Casual. Only 50 restaurants made the list (the remainder include individuals, technologies, marketing campaigns, etc.) and PizzaRev was bested in its category by Pie Five Pizza Company, the only other fast-casual custom pizza franchise to make the list, landing just two notches above PizzaRev at No. 13.

Co-CEO Irv Zuckerman attributed some of the company’s accelerated growth to its partnership with Buffalo Wild Wings. “BWW brings a variety of positive items, including history, credibility, connections and economies of scale, which all add to our positioning and growth potential,” Zuckerman told Fast Casual. “Since BWW has successfully navigated the franchise and corporate store model, we can take full advantage and separate ourselves from some without that wealth of experience.”

PizzaRev announced earlier this year that Buffalo Wild Wings completed a second tranche of its equity investment in the company that will allow the pizza maker to expand further. But even before BWW’s investment, PizzaRev was making strides under its accomplished double father-son executive team. Zuckerman is joined by his son Jeff Zuckerman who his CMO, and Eckerman’s son Nicholas Eckerman is COO as well as the chef who designed the PizzaRev menu. The junior Eckerman’s previous foodservice experience includes working for Ritz Carlton hotels and the Malibu Beach Inn in California.

The senior Zuckerman and Eckerman formerly worked in the entertainment industry as co-CEOs of Clear Channel Music, the largest live concert event producer in North America. Eventually, the entertainment division became Live Nation. Eckerman is quick to point out that a large part of producing concerts includes food and beverage sales at venues, and both executives had completed extensive research and development before starting PizzaRev.

PizzaRev faces many new start-ups as it attempts to carve out market share in the fast-casual custom pizza space. So what are its differentiators?

“We just felt it was a space that hadn’t experienced a food-forward revolution,” Rodney Eckerman told Franchise Chatter. “The large difference is how the store looks. The small difference is the complexion of the food offering, extremely high-quality ingredients. The differentiation in fast-casual in general is a high-quality offering.”

The PizzaRev Roman-style thin crust is something different from other competitors, he said. The dough is made in house to produce 11-inch, thin-crust individual pizzas that are baked in a 900-degree stone-hearth oven in just a few minutes.

In what PizzaRev likes to call its “craft-your-own” concept, guests walk a service line to select toppings from among more than 30 options, from the choice of sauce—organic Neapolitan red to barbecue sauce—to offerings ranging from various types of pepperoni or cheeses, roasted garlic, fennel sausage, crumbled meatballs and arugula.

All pizzas, regardless of the number or amount of toppings, are one price. Gluten-free dough and vegan cheeses are also options, or customers can choose from PizzaRev’s “Our Way” pizzas with predetermined toppings.

The menu uses the same concept for patrons who want to “craft” their own salad. There are also “pizza” offerings for dessert, including an Oreo pie made with melted butter, cinnamon, frosting, Oreo crumbles and other options.

Ovens at Center of Decor 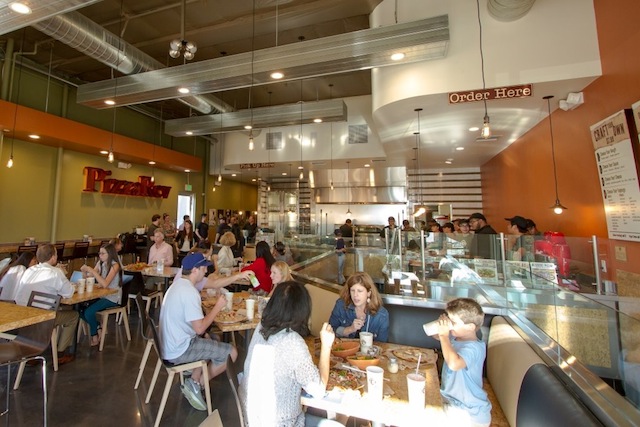