There are certain brands known to just about everyone who has ever set foot in a mall, and Auntie Anne’s is one of them. The smell of the baked-on-site pretzels is the sort of thing that tends to lodge in the memory, and even if you’ve never eaten one, chances are good that you’ve encountered their enticing scent wafting through the air. 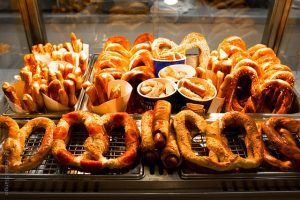 While the thin, crisp pretzel sold alongside potato and tortilla chips in the grocery aisle are familiar, what Auntie Anne’s sells is the giant, soft variety. Ironically enough, the brand was born out of a mistake: Anne and Jonas Beiler, the founders, sold pretzels from a stand at a Pennsylvania farmers’ market. One day they accidentally mis-ordered and ended up with the wrong ingredients; although the results took some tweaking, Anne stuck with it at her husband’s urging and eventually perfected the recipe. The brand debuted in 1988.

Franchising began in 1989, with the system reaching 100 units in 1992, opening its first international location (Jakarta, Indonesia) in 1995, growing to 700 units by 2001 and 100 international stores by 2003, and opening its 1,000th unit in 2009. The current count is approximately 300 franchisees with over 1,300 locations in every U.S. state and the District of Columbia plus 28 foreign countries ranging from Mexico, India, and the United Kingdom to Kazakhstan, Trinidad and Tobago, and Vietnam.

1. Auntie Anne’s has unchallenged dominance of the soft pretzel niche, and while it obviously competes with other food categories, it has the advantage of being unusual. Its unit count of over 1,300 and the fact that it has locations in every U.S. state, combined with the fact that its outlets are in high-traffic locations like malls, airports, train stations, and college and university food courts, mean strong brand recognition.

2.  That count includes at least 14 company-owned stores, and as I have discussed on numerous occasions in other reviews, those units help keep the franchisor in touch with market and operational realities and encourage continued innovation.


3.  The brand does have a positive perception in the nutrition arena, although that perception is only partly accurate.

The Original pretzel has 340 calories of which 45 are from fat, 5 grams of fat, 3 grams of saturated fat, and only 10 mg of cholesterol. Requesting no butter (an easy option since all pretzels are made fresh on site) cuts total calories to 310 and fat calories to 10, fat to 1 gram, and saturated fat to zero.

However, sodium clocks in at 990 mg or 41 percent of the recommended daily value, though it is possible to request no salt and reduce that to 400 mg. Choosing alternatives like Roasted Garlic Parmesan or Pepperoni pretzel naturally bumps those numbers up.

Still, compared to many fast-food snack options, Auntie Anne’s is an attractive choice and one likely to be appealing to parents when compared to cookies, ice cream, and other alternatives. (One of Auntie Anne’s marketing taglines is “Spoiling Dinner Since 1988.”)

4.  Auntie Anne’s outlets are found in shopping malls, transportation hubs like airports and rail stations, colleges and universities, and what the franchisor calls “non-traditional shopping and entertainment centers.”

The relatively small footprint does reduce costs somewhat, although estimated costs are not negligible at $35,000 to $45,000 for equipment and $90,000 to $175,000 for buildout. Careful site selection (depending on availability, of course) can reduce buildout costs, and compared to most food franchises these numbers are on the low end.

Lease cost will be the great variable; as is typical, the most lucrative sites (such as airports and new, high-traffic malls) will carry the biggest price tags. Recent initiatives include expansion into amusement parks and the introduction of food truck outlets.

The franchise fee is $30,000 with discounts offered for additional locations (10 percent) and veterans through the VetFran initiative ($20,000 versus $30,000). Royalty is currently 7 percent with a 1 percent advertising fund contribution.

5.  While a 25-year-old pretzel brand might seem a bit stodgy, there is plenty of evidence to the contrary. In 2012, the respected Zagat restaurant guide named Auntie Anne’s to its top five “popular quick refreshment” chains based on survey responses from diners who eat out nine times a month or more. Franchisor data from 2004 to 2011 shows consistent year-over-year revenue growth, and in 2010 the brand was purchased by FOCUS Brands, which owns such powerhouse brands as Cinnabon, Schlotzsky’s, McAlister’s Deli, Carvel, and Moe’s Southwest Grill.

6.  Finally, Auntie Anne’s is one of those brands you can be proud to join. It has a long history of charitable activity, ranging from its sponsorship of the Children’s Miracle Network to a corporate charitable arm created in 1995 to local and in-store fundraising programs. When Anne and Jonas Beiler retired from the company in 2005, it was to pursue the establishment of a family counseling center.

1.  One of Auntie Anne’s strengths—its size and market penetration—can also be a drawback for someone entering the system: finding an available market can be a challenge.

Ending up in the wrong mall (i.e., one that is headed into decline) will likely be a business-killer; be sure to carefully research foot traffic trends over the past few years at a candidate mall. Also, look at the trends for malls elsewhere in the market to see how the candidate location compares.

To provide a simple example, two malls in the Sterling Heights suburb of Detroit showed 7 percent and 8 percent traffic growth, but the two malls a few miles to the northeast showed 15 percent and 27 percent growth during the same period.