Self-service frozen yogurt is a concept with plenty to recommend it, an assertion confirmed by the rapid proliferation of brands in the franchise arena. Previously in this space we have looked at Pinkberry, and other franchises in the sector will follow. Here we’ll examine Menchie’s.

Menchie’s dates from May 2007, when the first store was opened in a suburb of Los Angeles by Danna and Adam Caldwell. Somewhat ironically, the inspiration to open their shop came from the fact that Adam took Danna to a frozen yogurt shop on their first date, so clearly they knew that the concept was not an original one. Nevertheless, they were willing to step up and compete, and that willingness has paid off. 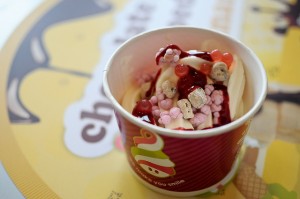 Franchising began in 2008; by 2009 the unit count was at 32, with a nearly 100 percent increase to 60 units in 2010. Growth has continued to accelerate; as of November 2013 Menchie’s has 350 units in the U.S. and Puerto Rico and 14 international markets, with another 350 in development (a phrase that typically means area development agreements are in place for that many stores, although it will likely take a few years for all of those units to open).

The name, by the way, also grew out of the Caldwell courtship and resulted from a misunderstanding. Adam, thinking that the word meant “blessing,” nicknamed Danna “Menchie.” His error originated from the Yiddish word “mensch,” which in German means simply “human” or “human being” but in Yiddish slang refers to an all-around good guy.

While not linguistically precise, the sentiment was well-intentioned (and well-received by Danna) and ultimately gave the brand (and its mascot) its name.

A large geographic footprint means a high level of consumer awareness of the brand, which is an obvious plus, and it also has financial implications including a larger advertising fund and the ability of the franchisor to potentially acquire competing brands. A high franchisee headcount means greater buying power and more leverage in negotiations with suppliers.

Rapid growth tends to produce a positive feedback loop—that is, because rapid growth is in itself a story that attracts media attention and because having so many members of the consuming public in so many places suddenly encounter a new brand, growth tends to accelerate even more.

2.  Product quality is one of the “3 Ps” underlying the Menchie’s vision (with the other two being People and Place), and the chain sells its Private Label Collection of yogurts that are custom-manufactured for the brand. All milk is free of rBST (the bovine growth hormone used to stimulate milk production), and the yogurt choices include vegan, gluten-free, and high-fructose corn syrup-free options. All flavors are certified kosher and have been certified by the National Yogurt Association to contain live, active cultures.

The proprietary flavors combined with the rigid product quality standards provide a strong competitive advantage. As is typical in the sector, Menchie’s has a long list of flavors (roughly 100) that are featured in rotation with 10 to 16 (depending on shop size) offered at any given time. A nice feature of the brand’s website is the ability for customers to suggest new flavors to the company’s “flavor team.” Also, the ability to create and distribute flavors that appeal to local consumers is key to success in many international markets.

3.  The market statistics Menchie’s offers are impressive: 90 percent of U.S. households consume frozen desserts on a regular basis, and the frozen yogurt sector currently produces about $8 billion in revenue in the U.S. out of $28 billion in away-from-home frozen dessert purchases in 2012. Just how faddish frozen yogurt will be this time around (some of you may remember the first appearance of the product in the mid-1980s) remains to be seen, although the sector is still growing and the wide range of flavors available today should help give it legs.

4.  The system has won a long list of awards from various media outlets and organizations. It also makes much of the “Hollywood A-listers” who frequent its stores, including Reese Witherspoon, Jennifer Garner, Ryan Seacrest, Selena Gomez, and Justin Bieber (though at the moment Bieber’s afoul-of-the-law antics don’t exactly mesh with Menchie’s family-friendly image, so they may not want to claim him).

1.  While size and rapid growth are for the most part positives, they also represent a minor drawback: it may be difficult to acquire a desired market or markets. Come to the party late and you may find that the seat at the table you wanted is already taken.