We’ve previously examined a couple of opportunities in the QSR sandwich sector, including Jimmy John’s and Firehouse Subs. Pita Pit takes the sandwich concept and updates it by using pita bread, yielding a product more akin to a wrap in terms of carbohydrate content. The concept is a relatively new one, but new can be a great thing when done right. 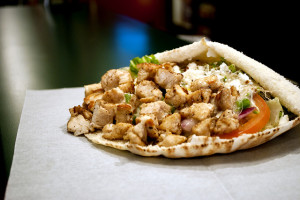 Pita Pit was founded not in the U.S. but rather in Ontario, Canada in 1995. A doctor named Jack Riggs (who continues to serve as CEO and happens to be a former lieutenant governor of Idaho) bought the U.S. rights to the concept in 2005 with the help of a group of investors, headquartering the new operation in Coeur d’Alene, Idaho. The concept uses a soft, Lebanese-style pita for its sandwiches rather than the tougher and less pliant pita bread that may be more familiar to some. In addition to being a lower-carb option, the menu offers lower-fat options as well.

1.  With about 350 units, Pita Pit is a relatively small franchise system. This does carry some minor drawbacks, which I’ll discuss in a moment, but the upside is that a small and new (both relative terms, of course) system provides much more opportunity—especially in terms of market availability—than some of the well-established systems that have been around for 20 or 30 years already.

Depending on the market you have in mind, you may be able to lock up an area development agreement (assuming that’s the scale you want) that will protect your right to build multiple units in a contiguous area.

2.  The unit count includes 17 company-owned units, which is a positive I have discussed previously and will not belabor again here.

3.  Novelty is also a marketing positive. The public is always looking for the next new thing, and a restaurant option—especially in the QSR space—that provides something significantly different than the other options in the marketplace will arouse consumer curiosity. Of course, curiosity will get customers in the door once; after that it takes quality product and quality service to get them to return.

4.  While adult obesity in the U.S. is hardly in retreat, there is still plenty of desire for healthier eating options, particularly when it comes to fast food. Subway has been using its “Jared” advertising for years now and not long ago introduced flatbread as an option to traditional bread in its restaurants, for example. If healthy can also be tasty, consumers will take advantage of the opportunity to eat healthier while still enjoying their meal.

Pita Pit offers grilled lean meat pitas including gyro, Philly steak, prime rib, and a whole list of chicken varieties (chicken souvlaki and buffalo chicken among them) in addition to the expected offerings like turkey and tuna. The list of vegetarian sandwiches has some less traditional and more attractive options like black bean patties, hummus, and falafel. There are also five (as of this writing) breakfast sandwiches that are available all day.

5.  Startup costs are comparable to other sandwich concepts on the lower end of the expense spectrum. The franchise fee is $25,000, although Pita Pit participates in the International Franchise Organization’s VetFran initiative and offers a $5,000 discount to veterans. Total estimated investment for opening and the initial three months of operation ranges from $198,550 to $320,579. Financial qualifications are net worth of about $250,000 and liquid assets of $75,000.

6.  Pita Pit prides itself on innovation in its franchise support. One aspect I found particularly appealing is the marketing website. Offering professionally-designed marketing materials, it provides the option to customize many of them for your location and print them on demand.

7.  Finally, I like the fact that the company’s executive team includes many former franchisees. Four of the eight team members—the VP of franchise growth, VP of franchisee enrichment, VP of brand promotion, and VP of operational systems—were all either franchisees or worked in company-owned stores. The benefits of this should not be underestimated.

1.  Pita Pit really does not have many drawbacks. As is typical for restaurants in this sector, stores are typically located in strip malls. In-line locations will be cheaper but generally have lower visibility while more prominent locations are more expensive, so it is a question of whether the additional volume will warrant the higher cost.