This is a sponsored edition of Why Invest, written by Brian Bixler.

Having started his career working with beakers and test tubes, it’s no wonder Ron Holt has taken a scientific approach with his own company, Two Maids & A Mop, based in Birmingham, AL.

A graduate of the University of Georgia, Holt became interested in the idea of recurring revenue while leading the contract laboratory services division of Micromeritics Instrument Corporation in Atlanta. He says the lab was able to generate more than $3 million in sales annually from just 30 to 40 clients. This recurring revenue model intrigued Holt because there was no need to resell the services to his clients. As a result, Holt wondered what it would be like to start his own service business and hang up his lab coat.

Once he started exploring service companies with potential for growth using recurring revenue, Holt settled on the residential cleaning industry. In 2003, he purchased a small, family-run business in Pensacola, FL that he later rebranded into Two Maids & A Mop. Holt has grown the small business into a legitimate national brand, which was recently recognized as the nation’s fastest growing residential cleaning company, according to Inc. Magazine.

Holt spent more than one decade working on his experiment. As he expanded from one troubled location in Pensacola to twelve successful units in five Southeast states, he continually perfected his model, relying on technology, formulas and highly systematic operational methods until he had the cleaning business down to a science.

“I purchased a business that really was struggling, needed a lot of work and a lot of turnaround,” he said. “It took about six months to get out of the red and about a year to get a paycheck. It forced me to really get on the ground and learn the inside of a cleaning business, the strengths and weaknesses of the industry and a way to compete on a level that was different from my competitors.”

Holt is now teaching others what he has learned by nationally franchising his carefully incubated brand. The first Two Maids & A Mop franchises opened last year in the Tampa, FL market with plans for eight to ten more to begin operations in 2014. Holt says his cleaning service has three main differentiators:

Experience – Two Maids & A Mop was never built to simply franchise the concept. In fact, the original plan was to create gradual, organic growth with 1-2 new locations opening each year. However, the success within each new office was so overwhelming that Holt decided that franchising may need to be explored. Holt believes that his practical experience from growing twelve corporate sites sets the brand apart from many cleaning franchises.


“I’m amazed that so many cleaning franchise concepts start with just one pilot location. We started this company more than ten years ago and we’ve been directly involved with the day-to-day operations ever since. It’s rare to find a cleaning franchise brand with so much direct operating experience,” Holt said. “I still remember our early days when we struggled to just get the phone to ring.” 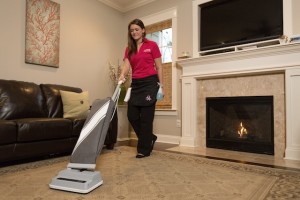 Pay-for-Performance Plan – Holt calls this industry-changing approach his “purple cow,” something that completely sets his brand apart from the rest of the herd. As the company website puts it: “By itself, it sells the brand. Feedback from a client determines the employees’ compensation level. The higher a team scores on a rating system, the more it earns for a particular job. Feedback is received using an electronic survey and nearly 50% of all clients provide their opinion within 24 hours of the cleaning. It puts power in the hands of the client and ensures employees will do the best job possible. It’s a true motivational strategy that creates big incentives for a team of two maids.”

“Early on, I recognized the need for our industry to have a difference maker,” Holt said. “Internally it’s a huge motivational strategy that we can put in place every day. And externally, it’s an amazing marketing tool that can be used to convert a lead into a paying customer.”

While other companies have tried to imitate the performance plan, none has been as adept at tying it to modern technology by making it easy for clients to post feedback on social media and review websites. Which brings us to Two Maids & A Mop’s third differentiator.

Technology – You won’t find any Yellow Pages ads for Two Maids & A Mop, nor will you find advertising in newspapers, magazines, direct mail postcards or parking lot fliers. “We scrapped all traditional marketing years ago,” Holt explains. That means printing costs were zero for the company during the past two years. Instead, it relies on a proprietary online advertising strategy that implements social media, search engine optimization and online word of mouth.

“Today, online word of mouth is much more powerful because a person’s voice can be heard by hundreds – if not thousands – of other people. We have a unique strategy that gets our customers talking online and we utilize it every day in a big way.” he said. “Our target demographic utilizes the internet when searching for a housekeeper and our brand is at the forefront of the cleaning industry when it comes to online marketing and advertising.”

With its business model honed and tested, Two Maids & A Mop is ready to roll out its franchising plan and is looking for candidates, male and female, who will be an owner-operator rather than an absentee owner. They should be interested in running their business, not necessarily cleaning houses, but turning leads into clients. 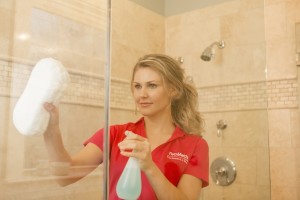 Holt also prefers that potential franchisees understand the role of technology in business today and in his business specifically: no car wraps, brochures or fliers. “They’ve got to understand technology and accept that our online marketing strategies provide the best ROI when growing the business,” he said.

Because of the heavy reliance on technology, franchisees are awarded an entire metropolitan statistical area as a territory, not just a city or region.

“With no paper or offline advertising it’s difficult to carve out a city using multiple zones,” Holt said. “Of course, that’s a good thing if you want to own a territory because you get to own a very large, protected metropolitan area. We’re awarding larger territories than anyone else within our industry.”

According to the company’s 2013 Franchise Disclosure Document, the total investment necessary to begin operation of a Two Maids & A Mop franchise is based upon the size of the market:

Holt’s methodical approach to Two Maids & A Mop doesn’t end with recruitment and marketing initiatives, but is also applied in the areas of training, employee hiring, and house cleaning. It also led to formulating a proprietary process for converting a lead into a permanent client with a six-step process for customer retention.

During training, new owner-operators will discover that almost all of the systems in the Two Maids & A Mop model are automated, making ease of operations another selling point for the company.

Heading into 2014, Two Maids & A Mop is shooting for several milestones: to have at least its first eight franchises signed and opened by the end of the year, to establish a company intranet to create additional ease for communicating and sharing resources with franchisees, and to digitize its 400-page operations manual. Also, the company has just launched its very first marketing efforts using online franchise portals and pay-per-click advertising on Google, Facebook and LinkedIn.

While Two Maids & A Mop will be a national franchise, the company is concentrating its efforts first in the Southeast and Southwest, with special emphasis on specific cities: San Antonio, Ft Worth and Austin, TX; Louisville and Lexington, KY; Charleston, SC; Baton Rouge and Lafayette, LA and Jacksonville, FL.

Those cities have been chosen based on detailed research. In fact, the only aspect of the business that Holt has left to his heart and not his head is the decision to adopt Cleaning for a Reason as his corporate charity. The non-profit organization provides free cleaning services to households with cancer patients and received support from Two Maids & A Mop long before Holt’s own father died of gastric cancer in 2012.

For its philanthropic efforts, Two Maids & A Mop was named Maid Service of the Year by Cleaning for a Reason in 2012. Other accolades have resulted from more objective data: Based on its revenue, three-year-growth and number of employees, Two Maids & A Mop earned a spot on the Inc. 5000, taking special rankings among the Top 100 Consumer Products and Services companies (No. 68), as well as being ranked No. 9 in the top 100 Alabama companies and No. 4 in the top 10 Alabama companies creating the most jobs in Inc.’s Hire Power Awards.