Back in the late 1980s and early 1990s, frozen yogurt became all the rage, led by the TCBY brand. As the novelty wore off, frozen yogurt gradually became just another frozen dessert option, and as TCBY faded, the dedicated “fro-yo” shop gradually disappeared. In recent years, the frozen yogurt shop has enjoyed a resurgence, however, rejuvenated by a new format—the self-serve shop—and new recipes. One option in this franchise sector is Pinkberry. 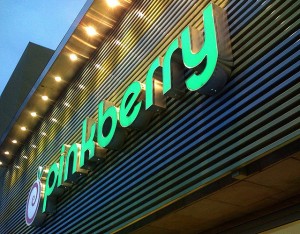 Pinkberry claims the honor of having “reinvented the frozen yogurt category” and first opened in 2005. Its current footprint is about 250 stores in 27 states and 19 foreign countries. Unlike most chains in this sector, Pinkberry also offers “fresh, not frozen, Greek yogurt”. Locations can be built out in a variety of formats.

1.  Pinkberry has a very strong following among its loyal customers, though that loyalty is greatest in its home territories (California having far more outlets than any other state). Howard Schultz, the chairman and CEO of Starbucks, so admired the concept that he approached the company in his capacity as a venture capitalist and now sits on the board.

2.  There are multiple format options for Pinkberry shops. Aside from the traditional retail outlet, there are also kiosks, airport shops, and university food service concessions (Auburn University, the University of Mississippi, the University of Arizona, Boston University, and Bowling Green State University all currently have outlets.) This means added flexibility both in franchise placement and cost.

3.  Pinkberry offers a number of options beyond the retail shop including delivery and both full-service and self-service catering. This provides additional revenue streams and helps distinguish the brand, but servicing these options brings additional costs and complexity. Among foodservice franchises, a yogurt shop is one of the less expensive to equip and build out.


4.  Greek and frozen yogurt are very popular at this time and have the reputation of being a healthier dessert alternative.

5.  The brand has a solid footprint overseas, so international franchises are certainly an option. In North America, the company currently lists Chicago, Denver, Phoenix, Seattle, Minneapolis, Baltimore, Portland, Salt Lake City, California, and Canada as its priorities for development.

1.  Yogurt has already come and gone once as a fad, and it remains to be seen whether it will have staying power this time. If it does fade in a few years, owning one or more highly specialized shops will be an awkward position in which to find yourself. On the positive side, compared with some other frozen yogurt brands, Pinkberry has more menu variety thanks mostly to its inclusion of fresh Greek yogurt. It has worked hard to remain current and relevant, for example by adding Greek yogurt which has now come to dominate the yogurt segment in the grocery marketplace.