You may have heard the humorous, rapid-fire radio spots: An order is placed with Jimmy John’s Gourmet Sandwich Shop and a doorbell rings a nanosecond later announcing the arrival of the food. The hyperbolic ads not only focus on what sets the franchise apart from its competitors—delivery—they also play up the chain’s claim of “freaky fast” service. 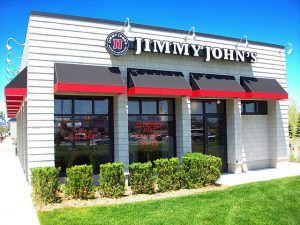 Delivery has been a part of Jimmy John’s branding since the very beginning after founder Jimmy John Liautaud established his first shop in 1983 and wheeled meals to students of Eastern Illinois University.

As another differentiator, Jimmy John’s includes “Gourmet Sandwiches” in its logo, evoking a more upscale dining experience than purveyors of more pedestrian subs and hoagies. While “tasty” might be a more appropriate description, the founder concedes, Jimmy John’s offerings include bread baked daily and meats with no additives or vegetable-based fillers. Ingredients are sliced in the store and the company also associates itself with other trusted brands by using such condiments as Hellmann’s mayonnaise, Grey Poupon dijon mustard, real olive oil, and red wine vinegar.

Jimmy John’s began franchising in 1993, opened its 1,000th store in 2010 and currently has more than 1,600 locations in 41 states. Franchise Chatter named it one of the franchises that defined 2011 and last year it saw an increase of 17.4 percent in the number of units nationwide, according to figures released by Technomic market research. While it fell three spots from the previous year, Jimmy John’s took the No. 5 spot on Technomic’s 2012 list of fastest-growing chains with sales over $200 million, losing some ground to competitors Firehouse Subs and Jersey Mike’s Subs.

Still, Jimmy John’s has a very firm standing in the sector. The total initial investment estimated by the company (excluding real estate purchase costs) is $300,500 to $489,500. According to the company’s latest Franchise Disclosure Document, the 2012 average annual gross sales (after deducting coupons and promotions) for both franchised and corporate-owned stores were $887,084 (up from $821,785 the year before). Moreover, 42 percent of the stores exceeded that average.