With the exception of Red Mango, none of the top frozen yogurt franchises has ventured far beyond their core fro-yo product line. In a category where most of the major players are indistinguishable from one another, I’m surprised by the lack of experimentation to establish real points of difference. 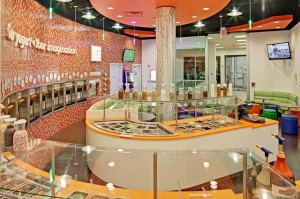 Frozen Peaks, a New Jersey-based self-serve frozen yogurt franchise with six retail locations in the New York City metropolitan area, recently announced that it now offers a wide variety of Jarets Stuffed Cupcakes in its Roxbury, New Jersey location. These cupcakes are a good fit for Frozen Peaks’ birthday party packages. They also make a delicious gift, or specialty dessert or favor for showers and parties.

“Frozen Peaks is known for premium frozen yogurt. Our customers expect nothing less than gourmet quality in everything we serve. That is why we feel Jarets, Home of the Stuffed Cupcakes, are that perfect fit. Jarets are frequently recognized in the news by such notables as Oprah, Martha Stewart, Today Show, Good Morning America and The Cooking Channel,” said Jay Mena, CEO of Frozen Peaks International LLC.

Two new Frozen Peaks corporate locations are in the works. Ground-breaking activities on franchises are scheduled for Summer 2013, and the company plans to add at least 30 additional retail stores over the next two years via frozen yogurt franchises.