No. 7 Pita Pit—Subway without the bread. That’s how Franchise Chatter described Pita Pit when it recognized the brand as a top franchise opportunity back in 2011. In place of high-carb bread like most of its competitors, Pita Pit differentiates itself by serving Lebanese-style pita (white or wheat) stuffed with grilled meats, vegetables, toppings, and sauces. 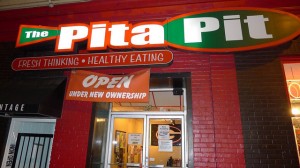 With some chains just beginning to offer healthier selections, such as wraps made with tortillas, Pita Pit has been making pita sandwiches since it started in Ontario, Canada, in 1995. It is now an American-owned company which began franchising in the United States in 1999 and was purchased by a group of investors in 2005.

Today, there are more than 190 Pita Pit units in the United States and more than 140 in Canada and other countries, making it a growing global brand. With a health-conscious menu, a larger choice of fresh vegetable toppings than many competitors, and breakfast service as part of its model, Pita Pit is setting some of the restaurant trends for 2013 identified by the National Restaurant Association.

Other aspects of the company that might attract new franchisees: Royalty fees at 6 percent are lower than some other companies, such as Subway, which collects 8 percent. Plus, the units are typically small, needing just 1,000 to 1,500 square feet for efficient operation.

Pita Pit has also been innovative in its marketing, which has helped attract new franchisees and customers. For example, it captured attention in 2010 by establishing a “pop-up” restaurant in New York City outside the building where Fox News Corp. broadcasts its “Fox & Friends” morning show. It served breakfast pitas to passersby on Fridays for several weeks while Fox interviewed a Pita Pit vice president during its broadcasts.

To read about the next franchise on our list of Top 10 Sandwich Franchises for 2013, please check back on Friday.