No. 9 Togo’s — One might consider Togo’s to be the Left Coast counterpart of top franchise Jersey Mike’s Subs: Both are iconic, longstanding brands in the markets where they originated and have grown contiguously to surrounding states. While Jersey Mike’s pitches its “East Coast-style” product, Togo’s declares itself a “West Coast Original.” Each were started by college students who have built their brands around high quality ingredients. But while Jersey Mike’s has achieved greater market penetration nationally, Togo’s remains a regional brand known mostly in the West. 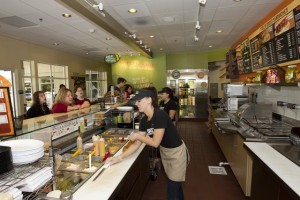 That could change as Togo’s grows. CEO Tony Gioia has said he expects 2013 to be a big year for the California-based sandwich chain, beginning this spring when it posted its 11th consecutive quarter of positive same-store-sales increases. With about 250 stores currently, the company hopes to reach a goal of 400 units by 2015.

In 2012, Togo’s signed 38 new agreements and opened 11 restaurants in California and Oregon while freshening the look of existing units to convey the atmosphere of a delicatessen. This year, it plans to open 30 new restaurants and remodel about 80 existing units. The new prototype, introduced to celebrate the company’s 40th anniversary in 2011, showcases fresh food with reach-in glass refrigerators, see-through counters, and a new décor.

With its greatest concentration of stores in California, Togo’s has branched out into Nevada, Washington, Oregon, and Arizona and has announced plans for rapid expansion in the latter two states. It also plans to open units in Idaho, Utah, and Colorado.

One of the ways it is attracting new franchisees is by offering financing. Last year, it announced the formation of a $15 million fund to kickstart its development in 2012 and beyond, making $10 million available for remodels and transfers, and $5 million to build new restaurants.

The chain also recruits new franchisees by promoting low start-up costs; however, they can vary greatly due to store size, age of the building, and regional restrictions. The estimated initial investment ranges between $264,000 and $414,500. Average unit volume is $600,000, with 25 percent of units reporting more than $800,000 annually.

CEO Gioia told Franchise Chatter last year that Togo’s traditional restaurants boast one of the strongest sales-to-investment ratios in the sandwich segment at 2-to-1, another enticing figure for potential franchisees.