Cheba Hut Could Smoke the Sandwich Competition with Counterculture-Themed Franchise 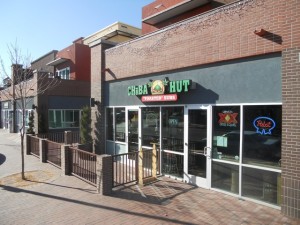 “Cheba” is a play on the word “cheeba,” a slang term for pot, and even the “Toasted” in its name references the drug. The menu is lined with cannabis leaves, sub sizes are measured as “nugs,” “pinners,” and “blunts” with names such as Acapulco Gold, Skunk, and Dank—old-school and current grades of marijuana. Plus, words like “homegrown,” “smoked,” “herb,” and “munchies” pepper the menu descriptions.

Behind the tongue-in-cheek concept, however, is an iconoclastic but serious management team that has grown the franchise to 16 locations in just over five years. The company was founded in 1998 near Arizona State University by CEO Scott Jennings before branching out into Colorado, California, Oregon, and other states; in 2011 it tackled America’s heartland, opening a restaurant in Iowa—the company’s first Midwest location.

Cheba Hut locates near universities with more than 20,000 students and a city population of at least 75,000. According to a Huffington Post report earlier this year, it’s likely to move next into Boston, New York, Philadelphia, and Pittsburgh.

Franchise Chatter named Cheba Hut one of the Top 10 “Under the Radar” franchises of 2012, but with expansion into major markets and the current political climate, the brand is likely to gain new renown. A 29.97 percent increase in revenue from 2009 to 2010, followed by an equally impressive 17.83 percent jump the following year, also brought the chain media attention.

Still, Cheba Hut is likely to repel conservative investors by virtue of its theme, reducing the potential franchisee pool. While college students may find it cool, some others do not. Case in point: the company fought a legal battle when it was denied a beer and wine license in Colorado because a judge didn’t like the concept of the restaurant; Cheba Hut eventually won its case after appeal.


To read the introduction to this series, please click here.