Slapping meat between a couple slices of bread has been a custom for centuries, but John Montagu is generally credited with giving the sandwich its English name. The fourth Earl of Sandwich, an 18th century English aristocrat, is said to have favored the form of eating bread and meat because it kept his hands from getting greasy when he played cards. 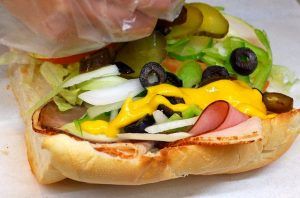 Much has changed since then. According to the 2012 Sandwich Consumer Trend Report, just about half of sandwiches consumed last year in the United States were purchased at restaurants rather than made at home. In the same report, market research company Technomic valued the sandwich category at $27.7 billion.

That’s good news for franchisees hoping to stack odds in their favor when investing in a franchise.

“If you are an entrepreneur looking to work in the business world for the first time, buying a sandwich franchise is easily one of the most affordable and profitable moves that even recent college grads can invest in,” Forbes magazine wrote in 2011.

To help distinguish the growing number of brands, Franchise Chatter has put together this ranking of our Top 10 Sandwich Franchises for 2013.

To read about the first franchise on our list, please check back on Wednesday.