Franchise Review:  Why TITLE Boxing Club is One of the Best Fitness Franchises for 2013

Its connection to an iconic worldwide brand, rapid growth, and very little competition within the sector for the workout it offers make TITLE Boxing Club one of the best franchise bets for investors interested in the fitness category. 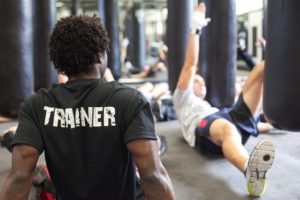 TITLE Boxing is the leading boxing, kickboxing, and MMA gear provider and the company provides a built-in customer base for membership at TITLE Boxing Clubs that are springing up around the United States and other countries.

The first TITLE Boxing Club opened in Kansas in 2009 and the company began its franchise program in 2011. Since then, it has signed some 440 franchise agreements with 100 clubs open around the United States.

Aside from the backing of a heavyweight brand, the company boasts what has been called a “dream team” of executives including former professional boxer Danny Campbell; business partners Tom Lyons and Rick Washburn; and former University of Michigan football player, coach, and veteran franchisee John Rotche, who joined the company as president in 2012.

The company is carving its niche in the fitness segment with a workout developed by Campbell called the Power Hour, which is unique to the fitness space. A warm-up followed by eight, three-minute rounds of boxing with a bag, followed by core work with a medicine ball is designed to bring a boxer’s training regimen to the suburbs. It allows TITLE Boxing Club members to burn 1,000 calories an hour while feeling physically and emotionally empowered.

One of the advantages for potential franchisees is access to TITLE Boxing Company’s database of customers who are notified by email whenever a new club is opening in their area. Each club also has retail space for TITLE merchandise, which creates an additional revenue stream for the operator.