Franchise Review:  Why RetroFitness is One of the Best Fitness Franchises for 2013

While other fitness franchise models focus on scaling back the size of clubs and eliminating unessential amenities, RetroFitness is defining its brand as “more fitness for less money” with big-box facilities chock-full of distinct features based on a ’80s theme. 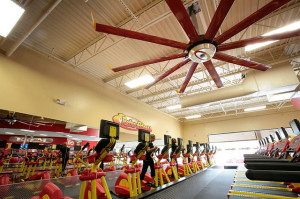 The idea is to provide members with good value through an extensive array of amenities for a low, monthly membership fee of $19.99.

Casaburi has worked on building brand awareness nationally with some unusual strategies, such as purchasing a billboard in Times Square that could be seen on the New Year’s Eve broadcast of “New Year’s Rockin’ Eve,” hosted by Ryan Seacrest on ABC; Casaburi also promoted the franchise on an episode of the CBS reality show “Undercover Boss.”

Franchise Chatter recognized RetroFitness before those two marketing coups. It named RetroFitness one of the top franchises that were operating “under the radar” before ranking it the No. 1 fitness franchise in 2012. From New Jersey, RetroFitness has spread to New York, Pennsylvania, Connecticut, Delaware, and elsewhere. It began 2013 with 90 clubs open and expects to have another 25 open before the end of the year, including its first in California and North Carolina.

By focusing on new technology and top-of-the-line equipment, it hopes to continue attracting new members and franchisees. The company aligns itself with other established brands by offering Life Fitness and Hammer Strength equipment, P90X gear, and Under Armour apparel in its clubs.

According to the company’s Franchise Disclosure Document, the total investment necessary to begin operation of a RetroFitness franchise is between $861,250 and $1,522,499. While the initial investment is higher than many of its competitors, the company has also offered higher Earnings Before Interest, Taxes, Depreciation, and Amortization (EBITDA).


In addition to being a franchisor in the fitness sector, Casaburi also founded a second franchise operation, Let’s YO! frozen yogurt, in 2011. Franchise Chatter also recognized that chain as one of the top frozen yogurt franchises of 2013.

To read about the next franchise on our list of Top Fitness Franchises for 2013, please check back on Wednesday.

Previous post: How Much Is a Firehouse Subs Franchise? (Detailed Franchise Costs)