It seems appropriate that Let’s YO! frozen yogurt stores are awash in the color of a Granny Smith apple. Founder Eric Casaburi says he wanted to have a sleek, crisp, high-tech atmosphere that would rival what consumers find at an Apple computer store. And the Apple connection doesn’t end there: Each Let’s YO! also has iPads strategically placed in seating groups for use by customers while they’re enjoying a frozen treat.

It’s all part of Let’s YO!’s business model to offer what it calls “a yogurt experience,” the phrase that always appears as a tag line after the brand name.

“Our customers are going to come into our store and say, ‘I like the way it feels in here,’ ” Casaburi said in an interview with Franchise Chatter. “Our mantra is: It’s a great place to have a healthy treat but also to have an enjoyable experience. I’m talking about hanging out.”

To entice customers to linger a little longer, Let’s YO! capitalizes on social media to create a store’s social environment. The Apple iPads, for example, are hooked up to flat-screen, closed-circuit televisions within the shop, providing a live, continually updated feed of the company’s social media networks. The televisions allow consumers to interact with one another, post on the Let’s YO! Facebook page and watch their post appear within seconds on the screen. Other flat-screen TVs in the store are tuned to cable news programs, sports programs, or other information and entertainment channels.

Technology even plays a part at the self-service yogurt stations, where LED screens direct customers through the line and identify what flavors are being dispensed by individual machines.

Coffees and Smoothies Among Differentiators

High-tech gadgetry isn’t the only differentiator for Let’s YO!. Casaburi said he has changed the frozen yogurt model by offering more than just the star attraction on the menu. Let’s YO! is also open for breakfast with a selection of cereals and granola with fresh fruit; and a coffee station with a brewer specifically designed for the chain offers a range of coffee beverages, including light brews, dark brews, decaf, cappuccinos, lattes, and cafe mochas. 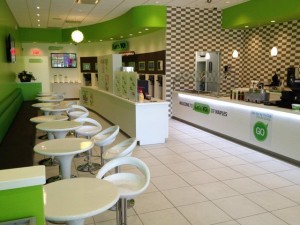 In addition, Let’s YO! serves a variety of fresh fruit smoothies which can be enhanced with vitamins, protein boosters, and fat-loss supplements. The company plans to begin promoting its line of smoothies heavily in the coming year, he said.

Casaburi said Let’s YO! wants to appeal to children, who are seen as an important demographic by frozen yogurt franchisors, but he’s also interested in attracting 30-something mothers who bring those children, as well as “tweeners,” who will enjoy both the frozen dessert and the high-tech amenities.

“You’re always going to get the kids at a frozen treat store. That’s the low hanging fruit. I’m going to get those kids if I get their parents engaged,” Casaburi said. “We’ve expanded the model from the core of having frozen yogurt, and we’ve done that to appeal to the college kids, too.”

Casaburi, 38, was just a college kid himself when he began building a franchise empire. After attending Arizona State University, he moved back to New Jersey before graduating and began to pursue a business he had been involved with since he was a teenager: health and fitness.