(Ambrosio’s note:  Welcome to this week’s edition of Fro-Yo Files, an exclusive bonus series for Platinum subscribers of Franchise Chatter.)

Alabama-based 32 Degrees Yogurt Bar is a midsize frozen yogurt chain, with 17 stores currently in operation. Franchise Chatter hears from its Founder and Development Director as they prepare to launch their franchises.

“They’re not building malls anymore,” Jeff Pizitz says resignedly. Malls have been home to his almost 40 franchises of Great American Cookie. But as the tides began to turn and “growth became stagnant,” Pizitz knew it was time for a change. A big change: For the first time, he would no longer be a franchisee but the founder of a frozen yogurt business. And now he’s about to become a franchisor.

Two years ago, Pizitz took a tour of the West Coast’s frozen yogurt stores, with an architect in tow. “The owners were happy to share information” with the mild-mannered Southerner, who then went on to Southern Florida for another look at fro-yo stores and their operations. Six months later, he felt he had the logistics well in hand. Rather than become the franchisee of a large established outfit, he opened his own store, 32 Degrees Yogurt Bar, in Birmingham in 2010. He then “rapidly rolled out 16 more stores, one every two or three months.”

Differentiating in a Crowded Market: Flexibility 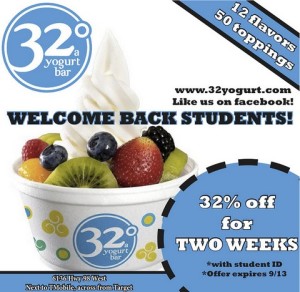 Pizitz says his stores have a “unique layout” and a “nice, contemporary look.” There is a vast selection of toppings, and “there are always 10 types of fresh fruit,” which the company gets from farmers’ markets when it can, even if these are a bit more expensive. Store sizes run between 1,200-1,800 feet, ideally with 100-200 square feet of patio space. There are typically eight employees per store, with store and assistant managers and two shift leaders.

32 Degrees doesn’t have a particular “hook” and it doesn’t seem focused on a particular target group such as children (Menchie’s) or the under-25 crowd (Forever Yogurt). And while Pizitz says 32 Degrees has tasty, high-quality frozen yogurt and ingredients, it was sort of refreshing to hear him say that “quality isn’t any different” from the better known yogurt companies.

Some companies’ frozen yogurt may be superior to others, but there’s probably not a vast difference between them, as there is between a French pastry and Twinkies. Like Yogurtland’s CEO Larry Sidoti, Pizitz notes the “low barrier to entry” in the business: it’s probably not rocket science to make a passable product.

Also like Sidoti, Pizitz expresses “frustration” with “so many people who shouldn’t be in the business.” He says, “No good business is easy. In this one, there’s a limited product line—not a lot of moving parts. Still, it’s hard work.” Unworthy fro-yo companies “think they can just stick a machine in a store, and it doesn’t reflect well on the industry.”

That low barrier to entry means that differentiating is difficult, and competition fierce. Jenny Buha says that 32 Degrees “was first in the [Birmingham area] but are now sharing the market” with newcomers. Both Buha and Pizitz acknowledge that they have to keep inventing new reasons to get customers to pass by a competitor’s store and head over to 32 Degrees.

Pizitz has come up with unique product offerings to gain market share. They’ve recently rolled out Twister, “a blended yogurt product like the McFlurry.” And for the cooler months, they’ve come up with Bottoms. On the bottom of each cup of frozen yogurt, there will be “a hot treat as good as any you could get at a five-star restaurant”: chocolate lava cake, warm apple pie, and a double-fudge cookie.

32 Degrees also doesn’t have a “look” that must be exactly duplicated across all franchises. “As long as it looks like 32 Degrees, has excellent customer service, and is run well,” Pizitz says, it doesn’t much matter if different stores have different designs and layouts.

I’ve been asking franchisors how open they are to franchisee suggestions, and somehow the question never really gets answered. But Pizitz seems to truly welcome creative input. In one instance, during a deal that ultimately didn’t go through, the company was prepared to let a franchisee tailor his store to his local Southwestern market. “It’s a plus to have a little individuality,” Pizitz says, noting the absolute uniformity of larger chains. “Local flair is good. As long as you still represent our brand, you can customize your stores.”