(Ambrosio’s note:  Welcome to this week’s edition of Fro-Yo Files, an exclusive bonus series for Platinum subscribers of Franchise Chatter.)

Despite increasing market saturation, new frozen yogurt startups are finding a foothold in the segment and original approaches to differentiation. Franchise Chatter talks to Marlo Francis, CEO of Di’Lishi, a frozen yogurt company based in Asheboro, North Carolina, as it prepares to open its fourth location.

Picking Up the Habit 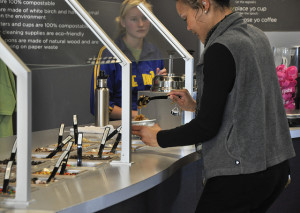 When Marlo Francis visited her eldest son at school in Savannah, she “had never really been an ice cream lover.” The calories and fat didn’t seem worth it. But when she had her first self-serve frozen yogurt there, she was floored: “I was shocked by how much I loved it.”

Fro-yo became a three-times-per-week habit. Francis would drive to larger towns, checking out different stores, noting “the commonalities.” A music major in college, Francis had always been interested in “creative things. I kept thinking, if I had a store, what would I do differently?”

She educated herself and developed a business model, all the time wondering what she could “bring that was different to the table.” When she was ready, she approached her husband, a pilot with American Airlines. “I practically had to revive him with smelling salts,” she recalls. But together, they “moved from one intersection to the next” as they refined the plan, and Di’Lishi (a play on “delicious”) opened in Asheboro in June of 2011.

Francis knew that the frozen yogurt industry had swollen, with few spots left on the playing field. Some small startups are content to be on the sidelines in large cities already dominated by large chains. “But I wanted to do it the other way around—I wanted to be a big fish in a small pond,” she says. Asheboro, with 30,000 people, was just the right size.

Francis says her business relies on three platforms: good for the body, good for the environment, and good for the community. She found a supplier that provided quality yogurt with active cultures, and made sure all disposable items such as cups and spoons were recyclable or biodegradable. But the most important platform, for Francis, has been community involvement.

Di’Lishi has a community giveback program. The company researches the kinds of charities and organizations that the local community is most interested in, and enlists customer involvement. But instead of putting out a jar at the cash register, Di’Lishi tells customers they have one vote with each purchase for one of three local charities, to which it will donate money. At the end of each giveback cycle, charities are ranked in first, second, and third place, and all receive money: “everybody wins.”

The program “sets up a healthy competition,” Francis says. “We’re joining hands, and making sure local dollars are spent on local charities and the local economy. It’s the greatest thing we do. We really become part of the communities we move into.” Community involvement engages customers and earns their loyalty. For Francis, customers’ appreciative responses to the program make her “want to make snow angels.”