Americans may be eating more grains, vegetables, and chicken when they dine out next year, if Technomic’s restaurant trends for 2013 turn out to be more than just predictions. The research and consulting firm’s annual look at leading restaurant trends are compiled based on input from Technomic’s consultants and editors who are asked to comment on the forces impacting the restaurant industry in the coming year.

The expert insights are based on site visits to various restaurants in cities across the country, as well as interviews and surveys of operators, chefs, and consumers. Technomic reinforces these opinions with qualitative data from its extensive digital resource library and quantitative data from its MenuMonitor database.

The trends are a mix of developments among major players as well as “edgy urban movements” that may or may not spread to the mainstream, according to Technomic. Others are already evolving from leading-edge to mainstream. Potential franchisees might find it worthwhile keeping them in mind as they scout for investment opportunities in the restaurant sector.

Mary Chapman, director of product innovation at Technomic, told Franchise Chatter that it’s tough to single out franchises that are leaders in several of the trends, “in part, because it doesn’t make sense for any concept to try to follow every trend out there.”

Still she was able to identify a few franchises that are at the forefront of some of the trends identified for 2013. 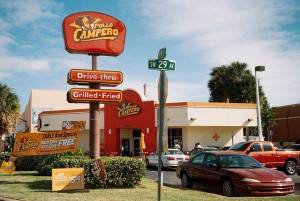 “Pollo Campero is a good example of some of these trends. We’re seeing South American flavors coming to the fore, and chicken is trending as well. Plus, it is adding limited table service, which helps it compete among its fast-casual competition,” Chapman said.

“Au Bon Pain has done a good job with snacks, and has several dishes marketed as snacks that are not simply smaller versions of other items. Since so many of its items are available for grab-and-go, there are plenty of choices for consumers on the run. Also, as it rolls out seasonal items, there is always a vegetarian option or two, which fits within our expectations of seeing more veggie and grain options appearing on menus.”


Finally, “we’re watching fast-casual Mediterranean concepts carefully, because they suit a couple trends — more grains, global flavors, build-your-own dish — and Zoës Kitchen comes to mind as one that is growing.”

Here’s what Technomic had to say about the 2013 trends:

1.  Vegetables take their star turn.  As more diners discover the joys of occasional meatless meals, the flirtation with vegetarian fare evolves into flexitarian fascination with actual vegetables.  That means not only innovative salads but also creative presentations of roasted or steamed veggies, even the assertive ones like carrots, kale, or Brussels sprouts. Vegetables at the center of the plate are welcomed by diners — who continue to seek fresh, local, healthful fare — as well as operators squeezed by rising costs for proteins.

2.  Great grains. Recognized as nutrition powerhouses — packed with protein as well as texture and full, rich taste — grains are also playing star roles on trendy menus. Dishes like polenta, couscous, or bulgur are central to some of today’s hottest ethnic cuisines. And a number of grains — quinoa, amaranth, millet, wild rice, corn, oats, and buckwheat — do not contain gluten, so they’re being nudged to the fore as part of the movement to gluten-free eating.

3.  Chicken surprise. Yes, chicken is ubiquitous thanks to its always-reasonable price and remarkable versatility, but now it’s actually trendy as well. New quick-service and fast-casual fried chicken concepts are popping up, offering Southern or spicy takes on a classic. And now that Latin-accented marinated chicken has established a niche, African peri-peri chicken may be next.

4.  Snacking nation. Habits of around-the-clock eating, the street food/food truck craze, consumers’ demand for flexible portions and prices, and operators’ need to move beyond price cutting on core menu items all combine to make snack fare a key trend. Tapas, mezze, and upscale bar bites in full-service restaurants are matched by flavorful novelties in limited-service restaurants, from Spicy Chicken McBites at McDonald’s and Chicken Littles at KFC to mini corn dogs at Jack in the Box and cheesecake bites at SONIC.

5.  More is more. On the other hand, there’s an opposite value-as-volume movement. Look for more deals like Pizza Hut’s Big Dinner Box (two pizzas with multiple sides) or Olive Garden’s Dinner Today & Dinner Tomorrow (a dine-in meal plus a to-go meal), as well as multi-course feasts for two, four, or more — even whole-hog pig roasts.

6.  Retro rising: diner and deli fare. Concepts of many types are looking to the menus of traditional and contemporary diners and delis for inspiration. We’ll see a proliferation of premium diner- and deli-inspired meaty sandwiches, full-flavored soups, even pickles — from traditional dill cukes to pickled red onion.

7.  Noodle-shop noodles. Ramen done right is a long way from dorm fare; it’s nutritious, subtle, satisfying, and redolent of exotic Far East street markets. Look for ramen, udon, soba, cellophane and rice noodles to show up in hearty layered bowls, fragrant soups, and even mixed-texture salads, not only in a burgeoning number of big-city noodle shops but in seafood and varied-menu restaurants as well.

8.  South America — the next frontier. Just as diners who love Asian fare have explored beyond Chinese to develop a taste for Thai and Vietnamese, those who favor Mexican are now looking south — all the way to Brazil, Argentina, and Peru. We’ll see mainstreaming of South American-style grilled meats, chimichurri sauce, ceviche, South American-Asian fusion seafood dishes and iconic drinks, from Brazil’s caipirinha to Peru’s pisco sour.

9.  Fast casual goes globe trotting. Success in the exploding fast-casual sector is no longer limited to bakery cafés and Mexican concepts. Build-your-own-better-burger chains and gourmet brick-oven pizza restaurants have been on the rise for some time, but now we’re also seeing more ethnic foods and flavors — from American barbecue to Southeast Asian soups and sandwiches to Mediterranean and Middle Eastern fare.

Previous post: Why Invest: Jack Butorac, President of Marco's Pizza, Talks About Thinking Outside the Box to Stay on the Cutting Edge of Franchising (Part 2)