Jack Butorac, president and CEO of Marco’s Franchising LLC, has enacted some very progressive programs in the Marco’s franchise plan, some of which are setting trends for the industry overall.  Perhaps the boldest move that has captured the imagination of the entire franchise industry is the establishment of Marco’s own internal financing programs, which have been noted by such publications as The New York Times and Nation’s Restaurant News.

With chains facing what the Times called “the worst credit squeeze since the franchise model boomed in the years after World War II,” Butorac recognized that Marco’s ambitious plan for expansion — requiring $100 million in capital to reach the goal of 1,000 stores within five years — could not be reached as long as traditional lenders were tightening their grip on loans due to the poor economy.

Under Butorac’s leadership,  Marco’s has done a number of things to eliminate roadblocks for financing: It assembled a group of investors and created a private equity fund for new pizzerias that will invest up to $100,000 per restaurant. It formed a subsidiary called Marco’s Assurance that provides a limited guarantee of bank loans to its franchisees and pays to relocate stores that end up in bad locations. It essentially covers the first $100,000 of a loss. Marco’s also established a leasing program that will finance up to $200,000 in opening costs for a new store. 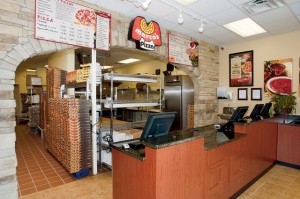 Marco’s has gone even further to remove obstacles and facilitate financing for its franchisees. In what may be another first for the industry, about a year ago, Marco’s hosted representatives from some of the leading financial institutions in the country during a two-day summit, opening a dialogue with them about problems and solutions to securing loans for Marco’s owner/operators.


Most recently, Marco’s became one of the very first franchisors to enroll in a lending program created by Bancorp and Franchise America Finance that all three parties are trumpeting as the next great financing model for restaurants.

“The program works like this: Franchise America Finance vets a franchisor based on its business model, franchisees, and real estate selection processes. The approval process requires more due diligence than banks tend to do when processing a loan application, but franchisors that make it into the program are able to get their operators reliable access to financing provided they meet certain predefined qualifications — a dream come true in today’s credit climate,”  said QSR magazine.

As a result of of these steps, Marco’s has “been able to attract a lot of financial institutions that are willing to finance our franchisees,” Butorac said.