Clarino attributes his success to his personal marketing efforts before, during, and after the opening of his new restaurant. Teriyaki Madness requires 1 percent of gross revenues to be paid to the franchisor for corporate marketing campaigns, primarily to build the brand. It also recommends an outlay of $5,000 to promote the grand opening of a new location. 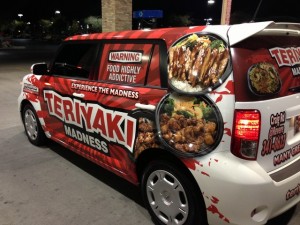 Clarino has gone beyond those requirements in promoting his newest location, employing methods that simultaneously help his first store and the franchisor by building brand awareness. He wrapped his Toyota Scion to become a mobile billboard with the company’s logo, photos of the food, an image of an Asian Elvis impersonator (which the company uses to reinforce what it calls the company’s “Vegas vibe”), and the unofficial company tagline: “Warning: Food Highly Addictive.”

Three months before opening the store, he also began placing signs in highly visible locations for maximum exposure. But above all, he said, the key to attracting customers is forging one-on-one personal relationships within the community.

“I think anybody who buys into a franchise wants to be accepted in their neighborhood,” he said. “If you open a Subway, you’re just a number. Teriyaki Madness has more of a mama-papa feel.”

Clarino said potential franchisees looking at Teriyaki Madness as a possible investment could learn from some of the things he has done to foster goodwill for his business, attract new customers, and retain the loyalty of those already won over by the brand and his stores.

Every morning, Clarino puts 10 VIP coupons in his wallet. As he encounters people during the day, he hands the cards out like gifts one at a time, treating people to a free entree. With a retail value of about $7.50, and only about 30 percent of that debited to the business, it’s a great way to get new people in the door, he said.

“They never come by themselves,” he said of those who redeem his VIP cards, so one person might bring his or her whole family, creating a total bill that could be more than five times higher than the value of the coupon.

“They’re guaranteed to use it within seven days, and 99.9 percent of the time they’re back again. I believe if you have face-to-face contact, you’ll have a higher rate of return than mailing something to someone’s mailbox.”