As thousands of men and women return to the United States after tours of duty, particularly in the Middle East, Baskin-Robbins has announced a new incentive program that could help members of the armed services begin a new career as franchisees.

Military veterans looking to start a new business in California, Florida, and other select markets may want to investigate opening a Baskin-Robbins. The company has launched a new incentive program intended to attract veterans by waiving the initial franchise fee of $25,000 in specific locations for qualified, honorably discharged U.S. veterans. 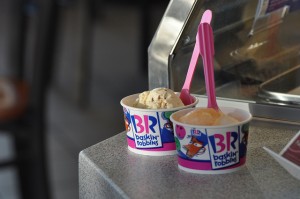 In addition, Baskin-Robbins has created a financing program specifically designed to assist new and existing franchisees to develop new restaurants.

In a release, Bill Mitchell, Baskin-Robbins’ senior vice president and brand officer said, we “hope to make someone’s dream of owning their own business a reality.”

The company is actively seeking candidates to help expand its presence in California and Florida, as well as other regions across the U.S. Potential franchisees should possess a strong financial background, the company advised, as well as a passion for their local communities.

Just days after the veterans’ incentive announcement, the company also launched its third annual Create Baskin’s Next Favorite Flavor Contest. As the world’s largest chain of ice cream specialty shops, the company has built its brand around the slogan “31 Flavors” with the idea that customers could enjoy a different flavor every day of the month. Next year, it will add a new flavor created by a contestant.

The contest invites creative customers to use its “virtual flavor creator” through the month of November and the winning flavor will be featured in Baskin-Robbins shops nationwide in 2013.

Patrons can learn the contest rules and create their creamy concoctions from a variety of flavors and various other ingredients by going to the Baskin-Robbins website. Meanwhile, this month, participating Baskin-Robbins stores will be featuring last year’s winning flavor, Nutty Cream Cheese Brownie, a combination of chocolate fudge ice cream swirled with a cream cheese ribbon, combined with walnuts and fudge brownie pieces.

The top 20 finalists in the contest will win free ice cream for a year. The ultimate winner will receive a trip for two to Los Angeles, where they will work with the company’s culinary team to bring their flavor to fruition.