Noble Roman’s may grab a bigger slice of the pizza franchise industry with the opening last week of its first take-n-bake unit, a concept that it will eventually roll out nationwide.

The Indianapolis-based franchisor of Noble Roman’s Pizza and Tuscano’s Italian Style Subs opened its first prototype store on Oct. 29 in a suburb south of Indianapolis and the company reported that six additional units are under development. Until now, the company has been selling its take-n-bake product primarily through a licensing agreement with more than 1,350 grocery stores nationwide. 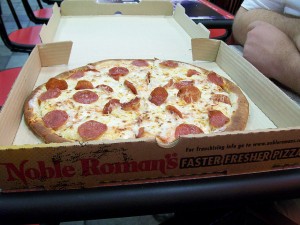 The take-n-bake concept not only reinforces the overall brand, but allows Noble Roman’s to cash in on a rapidly growing trend and compete with one of its rivals, Papa Murphy’s, for a bake-at-home pizza.

💵America's Most Lucrative Franchises of the Year (Subscribe Now to Unlock)


The company said the new take-n-bake franchise opportunity might find appeal among investors who don’t have enough dough (the green kind) for a traditional store. Because the stand-alone take-n-bake unit requires only 900 square feet with a minimal amount of equipment and build-out relative to a regular quick-service restaurant, it requires a much lower investment cost, the company said. Adding to the allure, the take-n-bake stores are expected to require less labor and other operating costs, such as utilities, making it simpler and more affordable to operate.

Calling the opening of the first take-n-bake franchise a “major milestone” in Noble Roman’s growth strategy, Chairman and CEO Paul Mobley said in a press release that that the move positions the company to become a ground-floor player in “the fastest growing segment of the pizza industry.”

Meanwhile, “we remain focused on our strategy, which involves growing our existing base of grocery take-n-bake locations as well as other non-traditional franchise locations in such venues as convenience stores, travel plazas, entertainment facilities, attractions, and other locations conducive to food service,” Mobley said.

Founded in Indiana in 1972, Noble Roman’s today has franchise and/or license agreements in 49 states, plus Washington, D.C.