If you’re a football fan — and even if you’re not — you’ve probably seen the commercials featuring Denver Broncos quarterback Peyton Manning gunning for Papa John’s owner John Schattner to give away pizzas this season. Now the sports star has put his money where his mouth is.

The Associated Press has reported that Manning is the new owner of 21 Papa John’s franchises in the Denver area. According to reports Manning and Schattner became friends during the 2011 Super Bowl. Since then, the two have been making commercials together for the chain, which is the official pizza of the NFL. 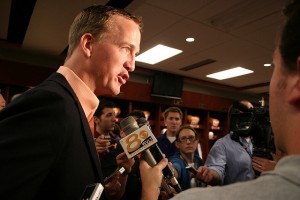 Now, Manning’s involvement as a pitchman for the pizza franchise just got a little more personal. In a new commercial that aired Sunday night during the Broncos vs. New Orleans Saints game, Peyton spoke as a new franchise owner and made a pitch to fans about following his lead and learning how they could also invest in a Papa John’s franchise.

“It’s a smart investment now and will be long after I’m done playing football,” Manning was quoted as saying.

Papa John’s is offering a special 2013 franchise deal that includes a 0% royalty for 18 months, no upfront franchise fee, and $50,000 in restaurant equipment. The company is already committed to give away 2 million pizzas to loyalty members this football season.

Investments like Manning’s are becoming a trend among sports stars with athletes beginning to get more equity in their roles as spokespersons. Tom Brady has invested in Under Armor and UGGs.

It’s possible you’ll be seeing Peyton push Papa John’s long after he’s retired from the NFL. The third largest pizza company in the world, Papa John’s has over 4,000 locations in 32 countries, and is counting on new franchisees to expand the company going forward.