Survey Shows How Sandwich Franchises Stack Up Against Each Other

For potential franchisees looking to go into the sandwich business, here’s something to chew on: While Subway is visited by more consumers, the nation’s favorite chain among the 14 major national and regional sandwich/wrap chains is Panera Bread.

That’s the conclusion drawn from a national study released this week by Market Force, a worldwide leader in customer intelligence solutions. Market Force conducted a survey of more than 7,600 consumers in August to determine which sandwich chains consumers like most and why they prefer one over another. Panera took the No. 1 spot with up-and-coming chains Jason’s Deli and McAlister’s Deli ranking second and third, respectively. The top three were followed by Firehouse Subs, Quiznos, Jimmy John’s, Arby’s, and Subway.

The study calculated the favorites based on the total number of votes and then factored in the number of locations for each chain. While Subway received the most total votes, which Market Force attributed to the fact that it’s one of the nation’s largest franchises, when the calculation was viewed as favorite votes per location, Panera landed at the top. 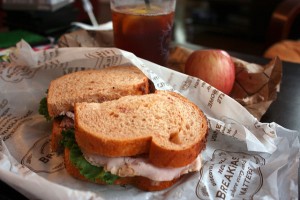 With its bakery-cafe concept, Panera has 1,600 locations across North America that capture customer behavior through a loyalty program, enabling the chain to use the data in formulating its menu and marketing strategies, according to Market Force. The No. 2 chain on the list, Jason’s Deli, is growing quickly, differentiating itself in the market with a menu that emphasizes healthy food. When analyzed geographically, Jason’s Deli ranked No. 1 in the Midwest. Otherwise, Panera was No. 1 in all other regions of the country: Northeast, South, and West.

The top three chains were also ranked favorably by consumers who were asked to rate the restaurants based on various characteristics, including food quality/taste, customer service, cleanliness, atmosphere, and overall value. Jason’s Deli ranked highest in the food and value categories, as well as cleanliness. Jimmy John’s was recognized as having the best service and Panera ranked first for inviting atmosphere. McAlister’s also performed consistently well in all areas.

“We’re seeing a shift in the sandwich industry, where now the customer experience is just as important as the convenience factor,” said Janet Eden-Harris, chief marketing officer for Market Force. “Brands like Panera and Jason’s Deli are differentiating in areas like atmosphere and health-conscious food, and that’s drawing customers in the door and making them return visitors.”