Cinnabon, Inc., the snack leader in the bakery-cafe segment, is continuing to strengthen its worldwide footprint with the latest international bakery opening in Tripoli, Libya.  A co-branded Cinnabon and Carvel store debuted July 2, 2012 on the busiest street in the city and signifies a milestone — the first-ever U.S. brand to debut in Libya. The location was in the works for more than two years, with the opening delayed due to the Libyan revolution last year.

The location was developed by franchise partners Arief and Ahmed Swaidek, brothers who plan to build another Cinnabon location later this year and will develop at least 10 Cinnabon stores in the next five years. The partners also have signed on to bring more Carvel and Moe’s Southwest Grill locations to Libya.

Cinnabon has more than 900 locations in 51 countries. Throughout the remainder of 2012, it projects opening approximately 130 new international bakeries globally with new market launches in Nicaragua, Iraq, and Ukraine. The company plans to enter an additional eight new international markets in the next 12 months, according to Mike Shattuck, President of FOCUS Brands International.

Shattuck has 30 years of international franchising experience working with several brands including Hardee’s and Popeye’s. He is currently responsible for Cinnabon, Auntie Anne’s, Moe’s, Schlotzsky’s, and Carvel outside the U.S. and Seattle’s Best Coffee in select markets.

Franchise Chatter (FC):  What’s the story behind your decision to open franchised Cinnabon stores in Libya for the first time?

Mike Shattuck (MS):  Following the Iraq invasion by US forces, the Qaddafi regime radically changed diplomatic and foreign policy positions, which led to a normalization of relations with many countries including the US. While change did not occur overnight, it led to an almost immediate interest in developing our brands in Libya, most notably Cinnabon. We selected Arief Swaidek and his brother Ahmed from several interested parties. With a strong regional presence in the culturally similar Arab world, we knew we would find strong demand for our incredible product, and high brand awareness.

FC:  Why do you think Libya is a good market for Cinnabon?

MS:  Our expansion into Libya was not a difficult decision. Our greatest start-up challenge is always supply chain and that was not an issue
with this market given the proximity to existing markets. We knew Cinnabon products fit the local taste preferences and general palate. These factors combined with pent up consumer demand for international brands, an opening of the market, and other factors gave us confidence the brand would be successful.

FC:  What do you typically look for in an international franchise partner? 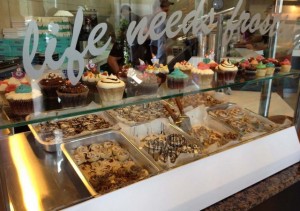 FC:  What was the initial response to the first store that just opened last month?

MS:  Incredible is an understatement. We are seeing sales at 4 to 5 times U.S. average unit volumes.

FC:  Are you tweaking the traditional Cinnabon menu or recipes to adapt to local tastes?

MS:  Not in the Libyan market, but we routinely address issues in international markets.

FC:  What are your franchise growth plans internationally?

MS:  We are looking to expand Cinnabon in North Africa, South America, Central and Eastern Europe, and Asia. We have a foundation in each of these regions.