Forever Yogurt, the chain that ignited the self-serve yogurt craze in Chicago, will aggressively expand both in its home market and nationally though franchising. With long lines and strong sales experienced at his first Forever Yogurt location, which opened in 2010, founder Mandy Calara is tapping into the surging “better for you” dessert trend and plans to add 50 new corporate locations, as well as 250 franchise locations, to Forever Yogurt’s portfolio over the next 3 years.

As part of Forever Yogurt’s growth and development strategy, Mandy is looking at low-unit mom and pop self-serve yogurt concepts that desire the support, marketing, and growth potential that a larger brand can provide. Also being targeted are would-be entrepreneurs looking to open their own locations.

Forever Yogurt opened their fourth Chicago location on April 13. Forever Yogurt has four more set to open before summer and eight by year’s end, including Chicago’s fifth location in Andersonville.

Forever Yogurt is a very young company — founder and CEO Mandy Calara is only 35 and co-founder and Creative Director Ahmad Yilmez is just 28. (You’ll learn more about Ahmad in a separate interview to be posted tomorrow.)

Mandy has a bachelor’s degree in biochemistry. For five years, he worked as a consultant Clinical Research Associate for pharmaceutical companies including Pfizer, GlaxoSmithKline, and AstraZeneca. Mandy then played professional poker for 3-4 years and started his own referral business for online gambling. The government started regulating online gambling and Mandy’s business became illegal, so he started a vacation rental company based in Chicago and Scottsdale and ran it for three years. The business grew so aggressively that Chicago passed ordinances to limit their growth.

While running the vacation rental business, he came across a frozen yogurt concept in Scottsdale and because he didn’t see any national players dominating in Chicago or the Midwest, he created the brand and image of Forever Yogurt.

Franchise Chatter (FC):  With a degree in biochemistry and work experience in pharmaceuticals, professional poker, and  vacation rentals, what made you decide to start a self-serve frozen yogurt company?

Mandy Calara (MC):  We’ve seen the successes of self-serve frozen yogurt concepts in California, although they had not yet penetrated the Midwest, East Coast, and Southern half of the U.S.  The concept itself was relatively simple, had low labor and food costs, and seemed to have the right elements for creating a very profitable business.

FC:  Can you walk us through some of the key milestones in Forever Yogurt’s history to date? 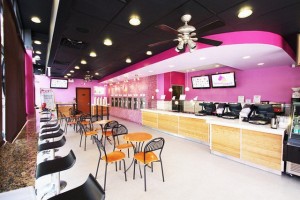 FC:  How are you positioning Forever Yogurt to compete with all the other frozen yogurt brands vying for consumers’ attention and loyalty?

FC:  I noticed that you have a lot interesting frozen yogurt flavors, including a new Greek froyo line.  Can you tell us about your product strategy, particularly when it comes to selecting your different flavors and toppings, suppliers, and new products? 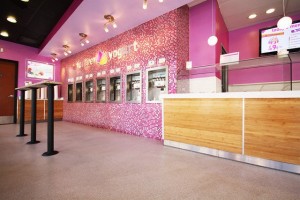 MC:  We currently have a line of over 80 frozen yogurt flavors, with up to 16 in rotation at any one time.  We try to introduce at least one new frozen yogurt flavor ever 1-2 months, and particularly try to keep our lighter tart and sorbet flavors available during the warmer months of the year.  The richer comfort flavors, like red velvet cake and pumpkin pie, seem to do well during the colder months of the year.

FC:  Tell us about your optional FROTH Hot Chocolate & Espresso Bar.  What is the story behind this concept, and what are your goals for this additional profit center?

MC:  FROTH is an optional add-on that can create an additional source of profit for the store.  It’s a nice balance, especially for stores that have colder climates.  FROTH hot chocolates and lattes are made with the customer’s choice of milk, and paired with melted chocolate.  Our current line has unique names for each cup, but includes melted Reese’s Peanut Butter Cup, Ghirardelli Dark Chocolate, Andes’ Mint, Nutella, Ghirardelli White Chocolate, Abuelita Mexican Hot Chocolate, as well as Hershey’s Melted Chocolate, with the option of a shot or two of espresso to spike the hot chocolate.  This makes for a simple integration, as much of the product is already available in bulk from our topping bar.

FROTH will allow the store to bring in additional items over time.  As the concept matures, it’s nice to keep adding fresh new items that go well with the overall concept.

FC:  Aside from opening new Forever Yogurt stores, you are also focused on converting small mom-and-pop froyo stores into your brand.  What can you tell us about this initiative? 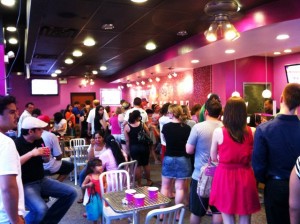 MC:  We’re interested in converting poorly performing frozen yogurt shops into profitable locations.  Some independent shops would benefit significantly by partnering with a well-organized brand that may have stronger pricing, better branding, and bulk purchasing power.  We’ve already begun doing this in the Chicago-land areas.

FC:  Are there any particular geographic markets you are targeting for expansion?

MC:  Our high priority locations include all of the Midwest; Boston, Washington DC, New York City, New Jersey, Baltimore, and Philadelphia on the East Coast; Miami Beach and New Orleans in the Southeast; and Austin, Dallas, and Houston in the South.

FC:  With all your stores currently located in Illinois, I’m sure you’ve felt the effects of seasonality first hand.  What makes Forever Yogurt a viable year-round business and what steps have you taken to work around the seasonal factor?

MC:  There is some seasonality with a frozen yogurt concept, although not as much as one might think. Surprisingly, stores still do well during the winter months, as people consume frozen yogurt for its health benefits.  Our FROTH Hot Chocolate and Espresso Bar certainly helps bring in additional people during colder months as well.  In February 2012, our Bucktown/Wicker Park store had sales in excess of $50,000 that month.

FC:  How do you see the frozen yogurt industry evolving over the next 3-5 years? 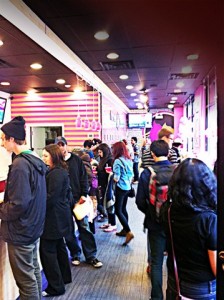 MC:  There will be some competitive shake out, and we expect that full service yogurt concepts and independent yogurt stores will find difficulty competing with national self-serve frozen yogurt brands.

FC:  Can you name a few brands (inside or outside your category) that you admire, and why?

MC:  I admire Chipotle for its simplicity and ability to attract a wide range of people. Starbucks might not be a franchise, but we all admire their ability to create one of the strongest followings.  They have expanded rapidly over the years while maintaining excellent consistency.

FC:  What are your long-term goals for Forever Yogurt?

MC:  We plan to do joint ventures to open affiliate locations in the New England and South Florida areas.  We expect to grow to over 50 affiliate locations as well as over 400 franchised locations by 2016, and expand the FROTH concept to offer a full line of pastries and a premium coffee/espresso line.

FC:  Is there anything else you wish to share about Forever Yogurt?

MC:  We’re having a great time being involved in this business.  It’s rare to be involved in something that revolves around happiness and good feelings, which resonate through our company and store employees, and is easily recognized if studying a Forever Yogurt customer.

Previous post: FDD Talk: Breakdown of the Initial Investment for a Yogurtland Store, With a Few Important Changes from Last Year's FDD

Next post: "While Forever Yogurt is a Franchise, No Two Locations are Identical," Says Its Co-Founder and Creative Director Ahmad Yilmaz (Q&A)