Even though the housing market is still unsettled, one Fort Lauderdale business owner is enjoying continued success in the home inspection market. HomeTeam, the nation’s leading residential home inspection company, recently recognized Colin Conroy with the 2011 Franchisee of the Year Award for continued excellence in South Florida.

“This is our seventh time receiving this award, and it’s thrilling each time it happens,” said Colin. “Even during rough times in the market, we have never stopped being the best at what we do. We can already feel an improvement in the market this year, as we did last year.”

His work background was in Australia — retailing in major department stores and working as Budget Rent A Car’s Franchisee Manager. Colin also served his country in the military for a total of twenty years, both Permanent and Reserve Army.

Franchise Chatter (FC):  What led to your decision to open a HomeTeam Inspection Service business over 15 years ago?

Colin Conroy (CC):  The decision to open the franchises occurred when my wife, Gena, who is American, was transferred from Pizza Hut in Australia and New Zealand after eight years, to Ft. Lauderdale, Florida, to open Pizza Hut franchises in the Caribbean. I wanted a business of my own in the US and I started to investigate various opportunities in 1995, after refurbishing our newly-purchased home in Pompano Beach near Fort Lauderdale for a year.

A friend of mine in Florida was relocating back to Ft. Thomas, Kentucky, near Cincinnati, and he invited me to consider a partnership in the home inspection business with him.  My wife and I have a second home near Ft. Thomas, her hometown. As part of my due diligence, I wanted to evaluate the competition up there and subsequently arranged a visit to HomeTeam’s corporate headquarters in Cincinnati. I discovered that HomeTeam had ten franchises for sale in SE Florida, and I realized that the opportunity to open my own business in Florida was a better alternative to being in a partnership in Cincinnati and commuting home to Florida on weekends.

I was impressed with the concept of a franchise in the home inspection industry, and with my background in Budget Rent A Car franchising, I decided to investigate the opportunity further.


FC:  What specific steps did you take to evaluate the HomeTeam opportunity before making your decision to go with the franchise?

CC:  I visited a HomeTeam franchisee in Tampa, Mitch Rothenberg, and spent several days with Mitch observing his home inspection business, which was then about two years old and was growing successfully with the team approach that was unique to HomeTeam at the time.

I was impressed with the marketing materials, experience, training program, and the novel concept that HomeTeam presented, and accordingly, I drew up a four year business plan and presented it to Paul Spires, the owner and originator of HomeTeam. Paul sold me the ten available franchises in early March 1996, and I opened my business on May 7th, 1996, after attending the training sessions in Cincinnati for two weeks. I later acquired two more franchises to bring the total to twelve.

FC:  Please describe your early years in the business. 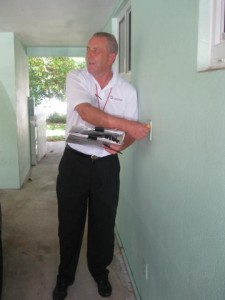 CC:  Several months before I opened the business, I had decided that I had to surround myself with experienced people in the roofing, air conditioning, termite, and other industries that would assist me to build a large business with the team approach, and relieve me of the initial burden of being proficient in those areas of expertise. I visited many companies to determine if they had the reputation, personnel, experience, and willingness to expand their business opportunities with my new venture. Like KFC’s Colonel Sanders, and every other successful entrepreneur, I was accepted by some companies, and rejected by others. Some of those original companies still work with me today.

FC:  Can you tell us about the size of your current operations?

CC:  I have over fifty different trades people participating in our business currently, ranging from elevator inspectors, seawall engineers, environmental technicians, generator technicians, etc., in addition to the four inspectors we provide for every home inspection (a roof inspector, a termite inspector, an HVAC technician, and our Master Inspector). We frequently add a fifth inspector to conduct Four Point and Windstorm Mitigation Inspections.

I can field six inspection teams simultaneously if required, as I have duplicated myself with five other Master Inspectors who are trained to the same level as myself. My business plan in 1996 included adding another Master Inspector every six months to absorb the business we were developing. We peaked at eight Master Inspectors in 2005. Our business has generated around 30,000 inspections since we opened, and despite the recession in the housing market in Florida for the last six years, HomeTeam dominates the market in our trade area. In the good years, our revenue is in the seven figure range.

FC:  Can you name 3 things you’ve done for your business that have contributed the most to the success you now enjoy?

CC:  The three things that we have done that contributed the most success were an initial commitment to the team approach of four inspectors per home, duplicating myself in keeping with our business plan, and providing a unique inspection service that was conducted in a quarter of the time that an ordinary one-man inspection business was taking, with an unmatched level of expertise.

Being very active in the Women’s Council Of Realtors (WCR) and our Local Realtor Associations has also been a priority from Day One.  HomeTeam in Florida has been an active State Sponsor of the WCR for fifteen years, and it is no coincidence that the top three franchisees in HomeTeam are located in Florida.