Moe’s Southwest Grill, the fast-casual restaurant franchise best known for its fresh southwest fare served in a fun and engaging atmosphere, has signed a deal that will bring an additional 25 restaurants to the Washington D.C. metro area (Maryland, D.C. and Northern Virginia) — creating 500 new jobs — over the next six years. The deal is part of Moe’s strategic growth plan to nearly double its nationwide presence from 440 locations in 33 states today to a total of 800 locations by the end of 2015. 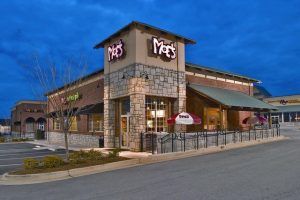 “Putting three of our most aggressive and smart franchise partners together in one market is really exciting,” said Moe’s President Paul Damico. “The fact that we have three best of class Moe’s operators behind these restaurants in D.C. is really going to make us stand out.”

Moe’s menu, consisting of fresh, made-to-order food with more than 20 flavorful ingredients, appeals to families and professionals, making the demographics of the Washington marketplace a perfect match for the Moe’s brand.

Although Moe’s is famous for its signature items like the Homewrecker burrito, Close Talker salad, and John Coctostan quesadilla (all served with free chips and salsa), the menu also features kids, vegetarian, and low-calorie options.

Previous post: Enter the "Change Your Life" Contest for a Chance to Win Free Admission to the International Franchise Expo, Two-Night Stay in NYC and $500 Cash

Next post: Charley’s Grilled Subs Kicks Off Baseball Season with a Text Campaign Where Participating Customers are Guaranteed to Win One of Five Prizes