This is the second of a 3-part series on the history of Lemon Heaven — an up-and-coming, low-cost, beverage franchise with a 16-year track record. To read the first installment, please click here.

Things were running very smoothly. Marty and Mirjam had secured another account at the International Centre, which was another major exhibition center in Toronto, and had also secured a very important account back in Vancouver at General Motors Place, a 19,000 seat arena where the Vancouver Canucks and Vancouver Grizzlies played.

Business was growing in both Vancouver and Toronto and Barry and Maureen (Marty’s parents) were starting to reach their limit. In April of 1998, Marty and Mirjam would take steps to register and protect their trademark “Lemon Heaven”, a process that would take until November of 1999 before their trademark registration was granted in Canada.

1999 would prove to be another monumental year for Marty and Mirjam as well as Lemon Heaven. In January, Marty would secure the account for The Metro Toronto Convention Centre, the last major convention and exhibition center account in Toronto.

Marty and Mirjam had just found out that Mirjam was pregnant with their first child, to be born in August. Nesting feelings took over and the couple started to look for houses to buy in the Toronto area. Business rolled along on cruise control and Marty and Mirjam continued to brush off questions about whether Lemon Heaven was a franchise.

On August 11th, 1999, four years to the day after they were married, their first child, Aiden, was born. Still living in their rented townhome in Don Mills, Ontario, Marty and Mirjam presented the idea of purchasing a home in Toronto to Barry and Maureen back in Vancouver. The answer was clear, NO WAY! Barry and Maureen were reaching their limits as the business in Vancouver continued to grow and desperately needed help.


Marty and Mirjam were confronted with the decision of selling the operation in Vancouver and settling in Toronto, where business was booming, or selling the business in Toronto and moving back to Vancouver.

Marty could not help thinking of all the people that had approached him over the years to buy a franchise. Eventually the decision would become clear, they would franchise their Toronto operations and move back to Vancouver to be with Marty’s family and continue to develop their existing operations there.

They looked to the vendors that they worked closely with at The National Trade Centre, vendors that already had a solid relationship with Servomation and the venue. They chose Steven Budman, and his brother-in-law Mike, of Pronto Food Service as their choice as Lemon Heaven’s first franchise partner. As of this writing (March 2012), Steven continues to operate at The National Trade Centre (now Direct Energy Centre) and Metro Toronto Convention Centre, as a Lemon Heaven franchise partner.

Timing could not have been better — in November, their trademark application for “Lemon Heaven” was approved. Just before Christmas in 1999, Marty and Mirjam would pack up their belongings and move back to Marty’s roots in Tsawwassen, a suburb of Vancouver, to continue to build on their operations and start learning about franchising. 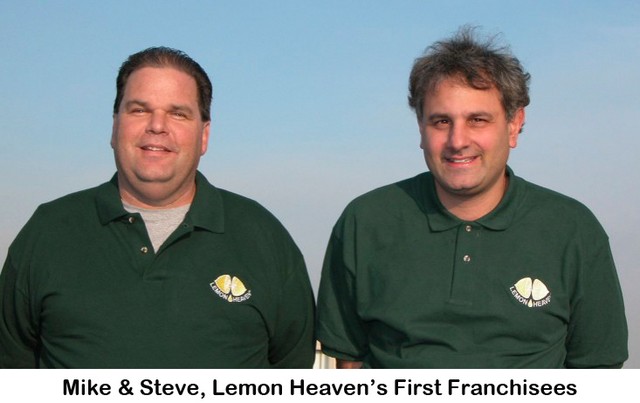 Business continued to grow in Vancouver and Steve and Mike were doing a great job as the first Lemon Heaven franchisees in Toronto. Back in Vancouver, they rented a small warehouse where they could build equipment in peace without eviction notices and visits from the police.

Lemon Heaven was operating at almost all the key venues in Vancouver and all major events by 2001 and it became clear that expansion of both operations and franchising would lie outside of the Vancouver area. Focused on growing their franchise base, they decided to exhibit their concept at franchise shows in Edmonton and Calgary in the fall of 2001.

First stop was Edmonton, where there was a great buzz surrounding the concept and the custom kiosk. Marty’s mother, Maureen, was on the road to help as they passed out free 24 oz. Lemon Heaven and were lined up all day. Their concept was to license a “special event” territory to a qualified individual that would replicate what they had done in Vancouver and Toronto. It was in Edmonton that they would find their second franchisee.

They packed up their equipment after the show and met with their “franchisee to be” the next day on the Monday before heading to Calgary on Tuesday. On Tuesday morning, September 11th , disaster struck as Marty and Maureen watched the fall of the twin towers in New York City. That horrible event would prove to have a huge effect on the Calgary show that weekend, as most people were glued to their television sets or were avoiding all public places in general. The show was considered a write off and they did not sign a third franchisee.

The show happened to be taking place at an exhibit center on the grounds of The Calgary Stampede. Determined to get something for his money, Marty decided to walk across the street and introduce himself and Lemon Heaven to The Stampede staff. He invited them to come across the street and check out the kiosk and product. That decision would prove to be huge.

They were awarded a spot at The 2002 Calgary Stampede and would grow that account to over thirteen locations as of 2011. (Their sales at the 2011 Stampede would amount to over 10% of entire system sales in just 10 days!)

Lemon Heaven realized, by 2002, that they could generate as much, or more, interest in a Lemon Heaven franchise from people attending the events as they could through costly franchise shows. They decided that they would take their operation on the road and generate some interest, while making money at the same time. It seemed people were much more excited about the concept when they saw the money streaming in and the people lined up 30 deep!

They started to service major events and fairs from Victoria to Winnipeg and they saw the significant amount of money that the larger fairs could generate. In 2002, they would join the Canadian Association of Fairs and Exhibitions as well as The BC Association of Fairs and Exhibitions so that they could solidify relationships with fair organizers and learn more about the concessions industry within the fairs.

With their franchise system starting to grow, they realized that they would need a professional office and warehouse space to meet prospects and train new franchisees. They bought a larger warehouse with office space in Delta, BC, as their head office.

Lemon Heaven was running smoothly and generating interest through events that they did across Canada. At this point, Lemon Heaven was signing 1 to 2 franchisees per year. All inquiries were from people that had seen Lemon Heaven operating at events in their area.

One day in June, Marty would receive a call from Barrie, Ontario from a very enthusiastic individual named Charles Ashford. Charles was on a school trip to a theme park in Toronto, called Ontario Place, with his daughter when one of the teachers told him that he just had to try this Lemon Heaven drink. When lunch rolled around, he went and bought a Lemon Heaven and at that point he knew he had to be part of this company and brand.

Enthusiasm, positive energy, and gut feeling seemed to be qualifications at the time for owning a Lemon Heaven franchise and Charles Ashford had it all. In addition, Charles was working with a respectable company at the time called IBM.

Charles told Marty that Lemon Heaven would be a great opportunity for him to make a little extra money on the weekends, while working with his wife Maxine, daughter Krysta, and brother Don. He thought it would be a great opportunity for 14 year old Krysta to get some hands on experience in business and provide her with an environment where she would deal with business contacts as well as direct customers and that experience would help build character and bring out her personality.

Little did he know at the time that this cute little side business would become a full time operation and he would leave the high pressures at IBM to become a full time Lemon Heaven franchisee, a “leisureologist” as Charles likes to call it.

In November of 2003, Charles, Maxine, Krysta, and brother Don would join the Lemon Heaven family as franchise partners.

By 2004, corporate operations had reached over $500K with systemwide sales of over $1.2 million. The system was steadily growing at over 20% per year in sales and they were slowly growing the franchise by one to two franchisees per year.

While working their outdoor special events, Marty noticed a trend. Lemon Heaven and the local mini donut vendor were consistently the two top grossing vendors at every special event. One product would do great when it was sunny and one would do great when it was cooler. With the popularity of mini donuts in the forefront of Marty’s mind, he approached GM Place Arena in Vancouver about adding the concept and they were thrilled. In the middle of February, they would open their mini donut operation on the upper level of GM Place Arena.

Next post: More Than 38% of Our Franchisees Gross More Than $1.3 Million Per Year, Says TWO MEN AND A TRUCK'S Chief Operations Officer (Q&A)