Last month, a national TV campaign featuring Domino’s Pizza president and CEO Patrick Doyle showed that Domino’s is different from other franchises — welcoming ideas from just about anywhere. Anywhere, in this case, is Findlay, Ohio – where Brian Edler, Domino’s Pizza franchise owner, invented the concept of Parmesan Bread Bites, eventually working with Domino’s chefs to make the product available in all of its nearly 5,000 stores nationwide. 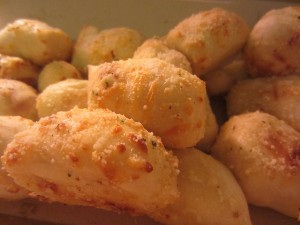 “The new campaign shows the cool way in which this idea came about, and that great ideas helping make Domino’s better can come from anywhere,” said Russell Weiner, Domino’s Pizza chief marketing officer. “Parm Bread Bites show that we continue to be committed to innovation and offering more menu choices for our fans and customers.”

It’s awesome to read stories about franchisors who are willing to listen and act upon new ideas from their franchisees.  Just like Robeks Smoothie Bowls (which I wrote about yesterday), Domino’s Parmesan Bread Bites is a simple idea — not a breakthrough by any stretch — but it’s something easy to implement and gives customers a reason to come back and try something new.

In addition, in the continued spirit of ideas coming from anywhere, Domino’s debuted Think Oven, an online suggestion box located on its Facebook page. Fans and customers have the opportunity to suggest great ideas.  The first project sought feedback and ideas on improving team member uniforms, and the winners were announced earlier this month.

Domino’s is the first franchise I know that has an online suggestion box on its Facebook page.  Sure, most companies claim they welcome feedback from customers.  But Domino’s takes things one step further by having a dedicated section on their Facebook page where they actively solicit input from customers.  The pizza franchise even holds occasional contests, where those with the best suggestions are recognized.  Kudos, Domino’s!  May you set a new trend in franchising.

Previous post: Between the Lines: Sales of New Menu Item Created by a Robeks Franchisee Now Makes Up 10 Percent of the Smoothie Chain's Total Revenue