In 1972, Bill Specht and his cousin opened the first Cousins Sub Shop in Milwaukee to curb a hankering for their favorite East Coast subs.  Their handcrafted, deli-style subs eventually gained a loyal following who especially loved Cousins’ secret recipe for freshly baked bread with the right combination of chewy-meets-crispy.  This bread eventually became the cornerstone for their “Better Bread. Better Subs.” positioning.  Celebrating its 40th anniversary in 2012, Cousins Subs and its franchisees now operate approximately 150 stores in six states.

Led by second generation President and COO, Christine Specht, Cousins Subs is enlisting an energetic management team to enhance its unique, family-owned brand. “We are going ‘all in’ with our new product initiatives, growth plans and marketing investments in 2012,” says Specht.  “Our focus is on our product, the quality of our franchisees, and a calculated and steady growth effort to ensure we’re successful for our owner/operators and our brand in the long term.” 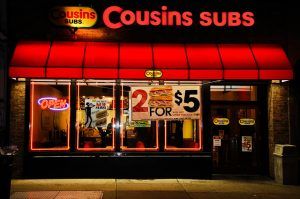 Cousins Subs is investing in a variety of in-store marketing assets, which includes the installation of contemporary new menu boards. The new Cousins Subs menu boards feature a contemporary aesthetic and have been re-organized to focus on placement of premium products.  Now highlighting product descriptions rather than images, the entire Cousins Subs menu is presented to the consumer, with hot items on one side and cold items on the other side.

“The new menu boards have given our system the fast casual look we desired and highlight our new creative direction.  After just three weeks in the system, we’re already seeing increased margins and consumer trial of new products, even those with limited or no marketing backing,” says Justin McCoy, director of marketing at Cousins Subs.

The company also introduced a new marketing campaign, “Better Bread. Better Subs. Better Day.” that will be executed in advertising and public relations plans for both consumer and franchise sales campaigns in 2012. The aggressive changes and increased marketing investments are aimed at growing both same store sales for existing franchisees and facilitating the launch of an aggressive franchise development plan to grow the company by 10 percent annually.

Next post: Essential Social Media Tips for Franchisees from Danny Brown, Award-Winning Blogger and Director of Retention and Social Media at Jugnoo (Q&A)