Every location still smokes all of their meats in the restaurant — the same way it was done in 1941, without any shortcuts. The Texas-based franchise is committed to exceptional barbecue at a great price. 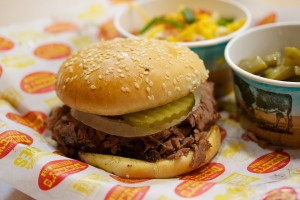 Dickey’s Barbecue Pit is reinventing the rules of fast casual and quick serve formats as they maximize each location’s potential with six revenue streams (catering, dine-in, bulk pick-up items, home-meal replacement, and holiday, plus online ordering to be launched later this year).

“We are fast casual but we are also quick service since our meats are smoked overnight in every location and although our food is fresh, it is not cooked to order,” Dickey’s Barbecue Restaurant’s Inc. president Roland Dickey, Jr. said. “Most fast food chains don’t have much night or a lot of weekend business and they don’t have a lot of other categories. They really only have weekday lunches. We, on the other hand have not just one or two, but six categories.”

Dickey said their owner/operators get “to the green” quicker than most of their competitors. “Our advantage is that we are able to open cheaper than other small footprint franchises and do considerably more sales than them. The key is to pack as many streams of revenue in as small of a footprint as possible,” the third generation president said. “Our footprint is the same size as one of the most popular sandwich franchises, but most of their business is during the day. They really do about 6 meals a week at their peak — we do 14.”

Dickey said catering is probably one of the chain’s most profitable avenues. “Catering sales make up 0-3% percent of fast food and fast casual businesses, with the average being about 1. Dickey’s is averaging about 12 across the board,” he said. “This is for two reasons; first of all, there is a natural relationship between barbecue and catering. Whereas that would be nature, the second part is nurture — we train our owners to market catering and push catering to new and existing customers. Numbers don’t lie, so we know it is working.” 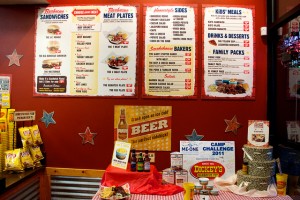 Dickey’s Franchise Benefits Program is a tiered system that will work for any budget. The program gives franchise owners, their families, and their employees, group purchasing power for their medical benefits. Benefits include a full line up of medical services, dental coverage, as well as legal and financial services.

“Some companies leave the burden of finding affordable coverage to their owner/operators,” said Lynn Little, legal compliance and risk management for Dickey’s Barbecue Restaurants. “This program eases the out of pocket expenses you typically get with small business insurance coverage — it gives our franchise owners a way to keep operating costs low and is a great incentive for their employees.”

Next post: Why We're Now Offering a Money Back Guarantee on Our Franchises by James Street, Co-Founder of My Destination, a Leading Online Travel Guide Franchise