This is a guest blog post by Rita Goldberg, founder and president of British Swim School.  Please check back on Sunday for my exclusive Q&A interview with Rita and learn more about the school’s unique business model.

In 1980, in Britain, I was a teacher working for Manchester Education Department in England. I was in their Aquatic teaching department when I was taken to a small home in Lancashire. The owner of that home was an ex-swim coach who had put a small pool inside his garage and was giving lessons. It was basically a hobby for him, but in me, a seed of ambition was planted. I was a Mom with no business sense or ambition, until that day. I knew then that I wanted to open a Swim School!

Since it had never been done in Manchester, I was told that it would never work and that I would never get financed or find the right property. The first thing I did was sell my own home. This would give me approximately half of the capital needed, even though I had not yet found the right property in which to build my school. I had two young children at the time, so “living above the shop” was of high priority.

A derelict, run down but very large house became available in the ideal position for this venture. It was three stories with a large basement, and plenty of parking. “You can’t put a pool in a basement. You will never get planning permission,” the naysayers said. They were nearly correct. It took many months and challenges, trips to council meetings, refusing to accept a denial of permitting, and the help of a great city councilor, but I did!

Next came funding. With business plan tucked under my arm, I traipsed from major bank to major bank, all of whom said “What a great concept! Brilliant! Excellent idea, totally unique! Not anything we can fund or help you with, but good luck!”

At that time, the BBC was running what we now call a reality show called Enterprise 80. People were asked to submit business plans of possible new ideas, and a panel would judge the viability of each one. To the top few they would offer financial help to start up that business. Hundreds of thousands of applications were received and only the final 20 were to appear on the TV show.

I applied on a whim and never expected to hear from them again. Well I did! I was not in the final 20, and was not eligible to fight for the very large amount of prize money, but I had been among the final 50 business proposals to be judged as top rate. The reward was to give me a guaranteed business loan…from a bank that had previously turned me down!

I now was getting closer to my dream. On a snowy March day, my dream came to fruition. The doors opened to 120 children and grew rapidly after that. I worked such long hours that I had major voice problems, but I absolutely did not care. My Swim School dream had come true.


Over the next twelve months, I knew I needed to develop a teaching method for younger children, as there were no good programs available that actually taught survival to the under fours. I had to find a way. Through hours in the pool, research of physiology, and with the help of some wonderful parents who trusted me with their most precious possession, their babies, and the British Swim School’s gentle fun back float method was developed. It was amazing what tiny little ones could achieve when they learnt to roll over to float on their backs in order to breathe! We gained much recognition, TV and radio publicity and we use this same method to this day. 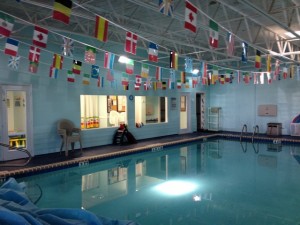 Ten years later, I emigrated to the USA, started my Swim School in Coral Springs, and have been very fortunate to be able to grow and grow. Our basic methods are the same; we still believe in back floating first (survival) and swimming second. We are now teaching children of the children we taught before. My company has now grown rapidly, and we have Swim Schools in three States.

In October 2011 we launched a franchise system, which we are confident will grow in popularity. It is a niche in the market that enables franchisees to expand and grow without the major expense of building a location. We feel that we are offering a tremendous opportunity to many different people. To the teacher who cannot afford huge purchase prices, the businessman who will see the enormous potential, as well as the “empty nester” who wants a great business. We hope to attract veterans too, as many will have been previous team swimmers and who may not have envisaged that a future could be made out of a previous passion.

We intend to be the best franchisors and to have many successful schools across the USA. Two of our managers have now become franchisees and we have three more possibilities at this time.

I do not feel that 30 years could possibly have passed since those first scary days of our basement pool, but they have, and looking back, I have nothing but gratitude that I was both able to turn a passion into a career, at the same time as being able to save many thousands of lives and bring the joys of swimming to people in both sides of the world. I am a very lucky person!

For more than 30 years, British Swim School has been dedicated to teaching water survival to beginners of all age groups. The company currently operates 13 locations and launched a franchise program in October 2011 as part of its strategic national growth initiative. Based in Coral Springs, Florida, British Swim School uses a gradual, gentle and fun process to teach babies as young as three months old the most important water survival skill – the ability to float on their back. For more information about British Swim School and franchise opportunities, visit www.britishswimschool.com/franchising.