Seva is a franchise concept that specializes in the art of brow shaping, facial hair removal, and waxing. Their signature offering is eyebrow threading. Seva grows within retail stores, and has established an exclusive partnership with Walmart to begin with. There is also opportunity to grow in other retail stores such as Walgreens, Sephora,  and Ulta. By using a growth model of a store within a store, the Seva opportunity guarantees entrepreneurs foot traffic in the thousands per week.

Vas and Sonal Maniatis, founders of Seva, utilize a very philosophical strategy to managing business, with a goal of “serving selflessly” in everything they set out to do.

Franchise Chatter (FC):  Can you tell us the story behind the founding of Seva?

Vas Maniatis (VM):  The concept for what would eventually become Seva originated back in the late 1990’s during a trip to the Little India neighborhood of Devon Street in Chicago, IL.

My then girlfriend and now wife of 12 years, told me she wanted to get her eyebrows threaded at a local shop. Not caring the least about eyebrows and practically running away at the thought of needles (there are no needles), I reluctantly agreed to accompany her to get her brows done.

I remember walking into this spartan little storefront on Devon and it was packed. As I looked around, I saw salon chairs filling the entire circumference of the shop and each and every chair was occupied by a woman having her eyebrows threaded. In a matter of minutes and with what looked like hands and arms and a spool of thread dancing to some peculiar rhythm, the customer would get up with amazing looking eyebrows. All in less than 5 minutes! I was mesmerized!

Till this point, I don’t believe I had ever noticed anyone’s eyebrows other than perhaps being distracted by Andy Rooney’s two caterpillars clinging to his forehead while watching 60 minutes.

That day, I realized that I had just witnessed one of those rare cultural gems hiding here in the USA right under our …eyebrows. I knew right then and there that this magnificent and ancient technique needed to be exposed and disseminated outside of the Indian community. 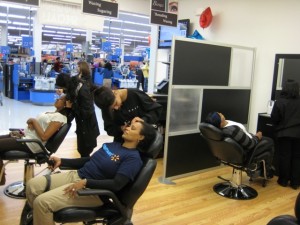 Fast forward to 2007. The Threading idea continued fomenting in my brain when the first waves of Threading kiosks began opening in malls throughout the country. At around the same time, I sold a real estate company I had founded, and did some travelling with my now wife and our two children. After about a year of getting the travel bug out of our system, we returned to the US refreshed, renewed, and ready to give our Threading venture the attention it was beckoning for.

We researched the market and looked at the mall model which had now grown fairly quickly. We came to the conclusion that the malls were great for disseminating the Threading technique, but that the mall model had a couple serious flaws. First, malls were terribly inconvenient. Although ok for the first round of hair removal, they were highly inconvenient for recurring visits by the customer. Second was the fact that the mall kiosks offered no privacy to the customer. Customers felt uncomfortable sitting in an open kiosk in the middle of the mall while someone removed their facial hair.

So we began exploring alternate locations to the mall. We needed a location that would allow us to give Threading maximum exposure without sacrificing convenience and privacy. It was a no-brainer: within retail environments such as Walmart. 30,000 plus customers per week entered a typical Walmart on a recurring basis. Most importantly, the retail environment could offer an unparalleled one-stop-shop convenience to the customer.

In 2008, Simply Eyebrows opened its pilot store within a newly-minted Walmart in Indianapolis, IN. It was a test for both Simply Eyebrows and Walmart. Fortunately, it was an immediate success. In fact, 3 ½ years later, our little 400 square foot pilot store now serves more than 1,000 customers per week!

In 2009, we began a purposeful slow, organic growth and began to open Simply Eyebrows in more States and within other retailers. They continued to be highly successful.

In late 2009-early 2010, Simply Eyebrows realized the need to expand our service offerings beyond Threading, as well as the need to grow nationwide. We rebranded our Walmart-based stores under the trade name Seva, which means “To Serve Selflessly,” and expanded our menu of services to include conventional hair removal such as waxing, as well as nail and spa services. Our Simply Eyebrows locations continued to expand within other retailers and non-retail environments outside of Walmart.

Mid-2010 marked our initial franchise offering and nationwide expansion plans for Seva. We currently operate in 9 States with plans to grow both nationally and internationally.

FC:  For those unfamiliar, please tell us about the range of products and services  you offer. How do you differentiate yourselves from other salons offering the same services?

Our elegantly appointed salons conveniently located within Walmart provide customers with the convenience of a one-stop-shop accommodating busy schedules. No appointment is necessary.

We differentiate ourselves from the competition by offering convenience in our locations and affordable pricing for three main category offerings – brows and face, spa, and nails. Customers have a variety of options to fulfill their beauty destiny including eyebrow threading, facial waxing, eyelash extensions, eyebrow tinting, body waxing, facials, manicures, pedicures, and no chip mani-pedis. We also offer a line of Seva branded products to enhance and compliment the brows and face category.

In addition, Seva utilizes a POS system that is second to none, allowing customers to easily access “today’s special” and electronically receive offers, appointment confirmations, and beauty service receipts.

FC:  How’s the demand for your services among customers of Walmart? 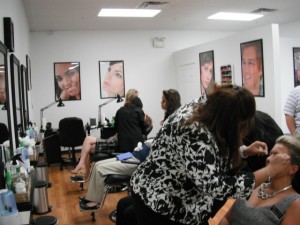 VM:  We have Seva salons that service more than 1,000 customers per week within Walmart. Our customers absolutely love the one-stop-shop convenience and price point we offer. We call it a value (price point and quality of service) with a value-add (one-stop-shop convenience inside Walmart). This gives us momentum moving forward as we prepare to expand into other retail locations.

FC:  How long will your exclusive relationship with Walmart last?

VM:  Our partnership with Walmart will last as long as both parties are happy with each other. We are free to offer our model in other venues but we are selective in who we partner with. Currently, the company is preparing for further expansion into other retail locations as well as airport locations.

VM:  In a nutshell, our POS technology empowers the franchisee with real-time data, including live web cam and transaction data from anywhere in the world. Franchisees are able to easily and conveniently monitor their stores from a computer or iPad without sacrificing the success of the store, allowing for an absentee franchisee business model. The technology empowers managers to keep customer engagement active and in real-time at the store level. The technology also enables franchisees to engage customers with coupons which are easily ordered and delivered to the store by the next day.

At Seva, we have a motto that Knowledge=Power.

FC:  What kind of assistance do you offer your franchisees when it comes to recruiting and training their staff?

VM:  We provide our franchisees with the best tools in the industry. Because of our strategic retail partnerships with built-in customer foot traffic, we don’t need to spend much money on traditional advertising. Instead, we utilize our cooperative marketing fund to proactively recruit the best employees in the industry. Seva Corp. handles the outgoing employment marketing ad placements (in conjunction with the franchisee’s local efforts).

We have built a hiring portal whereby all potential employees submit their application on SevaBeauty.com. Automatically, all franchisees and their managers receive the application based on the proximity of their salon to the location of the applicant. The application is pushed to their iPad-based POS and is accessible via a workflow throughout the hiring process.

In addition, each Seva location has access to certified beauty professionals who have been fully trained through a series of hands-on threading instructional classes offered at the Seva Academy, which is based in our corporate headquarters.

FC:  Can you describe the ideal franchisee for Seva?  What skills or attributes are required to be successful?

VM:  One of the most important things we require of our franchisees is meeting our core values: HLS: Honesty, Loyalty, Skill. Meeting the financial requirements is necessary as well, which is $100k liquid. Business acumen is great; beauty or salon experience is not necessary.

FC:  What specific steps do your most successful franchisees take in order to build and grow their respective businesses?

VM:  Our best Partners listen and follow our protocols. They realize that we’ve already made the mistakes and figured out the best practices, so now it’s about following our protocols and execution. 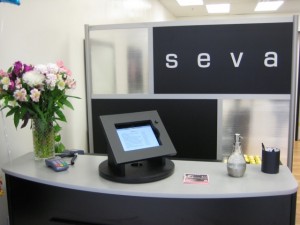 FC:  What are some of the things you are doing to help your franchisees become profitable?

VM:  Kaizen. We NEVER stop improving. EVER. One of our latest efforts: Investing and developing a robust e-Learning platform tied to our iPad POS to maintain the highest caliber of training and experts in the industry.

FC:  Can you tell us about the initial investment and ongoing expenses needed to open and operate one of your locations?  What can you share with us about your concept’s profit potential?

VM:  We offer an Item 19 during the FDD stage. I don’t discuss prior. We’ve been vetted and have formed a strategic partnership with the largest retailer in the world.

FC:  What are some challenges in this line of business that your prospective franchisees need to be aware of?

VM:  Focus and discipline. Don’t ever think it won’t take effort or work. It will.

FC:  What are your goals for Seva in the next few years and how do you plan to grow your business?

VM:  Organically. I don’t believe in selling, I believe in awarding. When the right Partner approaches us for a franchise, we award them Seva. I’m more proud of the fact that we’ve politely declined many more partnerships than we’ve awarded based on non-alignment of our core values.

FC:  Is there anything else you wish to share about Seva?

VM:  Seva: Its meaning is significant. It means to Serve Selflessly in Hindi. That’s our true mission.

Previous post: Want to Open a Restaurant and Have the Franchisor Manage It for You? Exclusive Q&A with Frank Simoncioni, VP of Sales for Doyle International