What is Freddy’s Frozen Custard and Steakburgers?

1.  Founded in 2002, Freddy’s Frozen Custard and Steakburgers offers a unique combination of cooked-to-order steakburgers, Chicago dogs, and other savory items along with its signature desserts prepared with premium frozen custard made fresh throughout the day in each store.

2.  Freddy’s opened its first location on West 21st Street in Wichita, Kansas and started franchising in 2004.

3.  Founders Scott Redler and Bill, Randy and Freddy Simon, operate six locations in the Wichita Metro area, two in the Kansas City market, and one in Tulsa, Oklahoma. Forty-nine franchise units serve other areas of Kansas and Oklahoma as well as Arizona, California, Colorado, Iowa, Missouri, Nebraska and Texas. 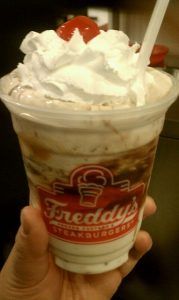 4.  The company was ranked Fifth Fastest Growing Chain Restaurant in the United States and Canada in 2010 by Chain Store Guide, a sister publication to Nation’s Restaurant News. More recently, Freddy’s was recognized by Technomics as the 5th fastest growing burger concept in the country.

5.  Freddy’s opened 12 new stores in 2011 and has 30 openings slated for 2012. New restaurants will debut in Utah, Florida, Nevada, Arkansas and New Mexico in 2012 as well as many new regional sites in established states. The company has sold development rights for 152 additional locations.