(Ambrosio’s note:  I’ve been toying with the idea of creating my own franchise app for quite some time, but without knowing where to begin, it’s no surprise that I haven’t made much progress.  As we enter 2012, I’m determined to expand my coverage of the franchise industry and to build a bigger business out of it.  Apps development (particularly as it relates to franchises) seems like an area worth investigating further.

Dave Howell, CEO of Avatron Software, is an excellent source of information on all things related to the apps business. I know that a lot of you reading this blog are not just looking at franchises but are also open to exploring other business opportunities and ventures. So the apps business is something that might be of interest to you as well.

This interview gives us an insider’s look into the fascinating world of apps development.  I made sure to ask Dave for advice on how to select the right niche, come up with a new product idea, market the app, and make money.  Thank you, Dave, for all the great advice!)

Franchise Chatter:  Can you tell us how Avatron Software got its start?

Dave Howell (DH):  I went to work for Apple in 2002 when Apple bought the assets of my company, Pablo Media, along with its purchase of Prismo Graphics. I worked there as a senior software engineering manager for six years, in the Professional Apps and iWork teams. I learned a lot about product design, about best practices with software processes and tools, and about leadership of very creative teams. While I was there I went back to school on nights and weekends, and got an MBA from Cornell in 2008.

Upon graduating, I left the company to found Avatron. I took the best practices that I learned from Apple, while leaving behind the philosophy of Willy-Wonka-style secrecy and the big-company slowness. I hired some great software engineers and QA folks and started building mobile apps that make people more productive.

Because we’re self-funded, we have the agility and freedom to adapt to rapid shifts in technology and market landscape, without risking dilution from missing VC covenants. It’s great fun.

FC:  For those unfamiliar, please tell us about a few of your most popular apps and how they help small business owners become more productive.

DH:  We have a few apps that are great tools for small business owners.

Air Display turns an iPad or Android tablet into a wireless computer monitor. It’s very simple to use. Air Display installs a “virtual video driver” on your Mac or PC, which then communicates with your mobile device. You can use the touch screen to drag windows around, use video output to mirror your screen to a projector, and auto-rotate. You can use a Bluetooth keyboard or the on-screen virtual keyboard if you want to walk away from your computer.

Air Sharing lets you view your documents on the go. It also lets you print documents wirelessly to a shared printer, and connect to a remote file server. So if you have documents “on the Cloud,” whether on Dropbox, Box.net, iDisk, FTP, WebDav, Egnyte, or something else, you can view them on your mobile screen, show them to clients, move them around, and generally take your office with you.

Print Sharing takes just the printing feature of Air Sharing and wraps it in an elegant, simple workflow. You can select a document or picture in the iOS Mail app or in the web browser, and send it to Print Sharing, which then lets you print. You just need a shared printer on your network.

We have just finished a new app called Air Dictate that lets you talk into your iPhone 4S and watch as Siri converts your speech to text and automatically sends it over to your computer, as if you had typed on your computer keyboard. This will come in very handy if you’re a slow typist, if you’re disabled, or if you just want to geek out by typing on your computer using only your voice.

And we have some other very exciting apps coming in the next few months.

FC:  What made you decide to focus your attention on productivity apps?

DH:  When the App Store opened, we saw a huge influx of entertainment apps and games. Air Sharing was one of the first few apps that was actually useful. We decided to 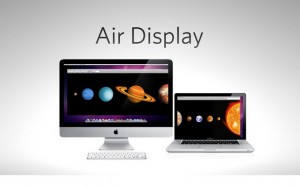 go that route for a few reasons.

First, we saw the iPhone as a potential game changer for productivity. We’re no longer tied to our desks when we want to get things done. We wanted to be part of that revolution.

Second, we wanted to use these tools ourselves. We saw some holes in Apple’s feature set and Apple’s workflow paradigm. We built Air Sharing because we believe that people are most productive when they can organize their work according to what project they are working on, rather than according to which app created each document or media. Maybe Apple has something in mind long-term with its new sandboxed limitations, but maybe not. And in the meantime, Air Sharing lets people get things done. And we built Air Display because we love our little laptops but their screens are just too small for us to write code on. Air Display gives us multi-monitor workstations in a coffee shop.

Finally, we wanted to work on apps that we thought we could build better than anybody else could. We had some really good ideas for games and entertainment apps, but there wasn’t any particular quality about our team that would give us unfair advantage in that world. But I think we do have a powerful advantage in productivity apps. Three of us were engineers on Apple’s iWork team. We worked on interactive graphic features in the Pages, Numbers and Keynote apps. We have a strong passion for building tools that empower people to do something easily that was once difficult or tedious. Building powerful new tools has been a driving force in my career since working on MIDI sequencers for musicians in the 80s, special effects tools for film and video in the 90s, and easy graphic creation tools in the last decade.

FC:  Can you describe your business model?  How do you make money?

DH:  It’s really simple. We write apps and submit them to Apple. People all over the world discover our apps in the App Store, and click the Purchase button. At the end of every month, Apple direct-deposits payments for 70% of the proceeds into our bank account. It’s a beautiful thing.

FC:  What is your process for determining which new apps to create?

DH:  Of course, the apps must do something useful and solve a real problem. We come up with ideas for new apps and features every day. We apply a few criteria to these ideas to decide which ones to work on. That’s necessary for an app to be successful. But we also have to justify why an app makes sense for us. Why are we the best company to produce a particular app? Here are some of these criteria:

• Our apps must provide us with software components that we can reuse in future apps, rather than just being one-off products.

• Our apps should leverage software components that we’ve already written. We have a pretty broad trove of libraries and examples to draw from, so anything that reuses these pieces will give us an advantage over competition.

• Our apps should broaden, rather than fragment, our product suite. For us, this means having something to do with connecting mobile devices, personal computers, and the Cloud. For another company it could mean something else.

To learn how you can find profitable niches, promote your own apps, and get started in the apps business even without a programming background, read Dave Howell’s advice here.

Next post: Hoping to Create My Own Franchise App, I Chat with Avatron Software CEO (and Former Apple Senior Manager) Dave Howell About the Business of Apps - Part 2