Nowadays, frozen yogurt franchise concepts are a dime a dozen.  There are a handful of top tier brands that have become household names nationwide.  But there are countless other regional and local players that most of us have never heard of.  Is it wise to choose a regional or local brand over a national chain, given the choice? Probably not.

But once in a while, you come across a new name with a good story and a promising team of people behind it, that it makes you wonder if there’s room at the top for another national frozen yogurt brand.  Only time will tell if Sweet Cece’s will graduate to the big leagues, but a recent interview between Brian Moore, co-founder of Sweet Cece’s, and Duane Marstelle,  business reporter at the Tennessean, left me with a very good first impression and makes me want to get to know the company even more.  (To read the full interview, please click here.) 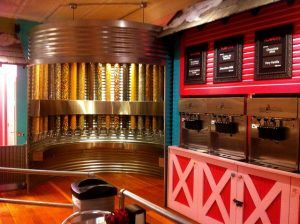 Prior to relocating to Franklin, Tennessee with his wife Cece and their four children, Brian Moore was involved in the healthcare business and also in development and construction in California.  In 2008, with both of those industries struggling, Brian sold his healthcare practice and was looking for something new to do.

💵America's Most Lucrative Franchises of the Year (Subscribe Now to Unlock)


Brian first heard about these little frozen yogurt shops in California from a friend who observed that these places were packed, yet required minimal staff.  Four months later, Brian took his daughter to get some frozen yogurt and was intrigued by what he saw.  It was always Cece’s dream to open her own dessert shop, and the couple felt this would be a good opportunity.

CeCe, whose family was originally from North Carolina, wanted to go back to her Southern roots. Based on their research, Brian and Cece felt that the Southeast was ready for a little mom-and-pop frozen yogurt store.

Their first store was in Belle Meade (opened in June 2009), but before they even opened the first location, Brian 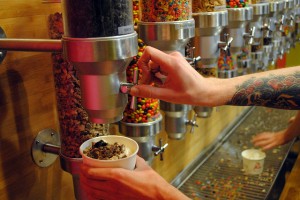 snatched up another location at Five Points in Franklin (opened in October 2009).  When they finally opened up the first store, the amount of money they were making was, in Brian’s words, “way over the top.”

Because of the success of their frozen yogurt shops, prospective investors took notice.  At first, the couple sold licenses for about six months, which explains why most of the early stores don’t have a uniform look.  They eventually beefed up their infrastructure to support a full franchising program, which is what they currently offer. They now have over 40 locations open in 2 Middle East countries (Kuwait and United Arab Emirates) and 10 U.S. states (Texas, Mississippi, Alabama, Florida, Tennessee, North Carolina, Kentucky, Indiana, Illinois, and Pennsylvania), with 50 more sold and in development.

The initial franchisee fee is $37,000 and the monthly royalty fee is 6% of gross sales.


Sweet Cece’s:  On Growing Too Fast 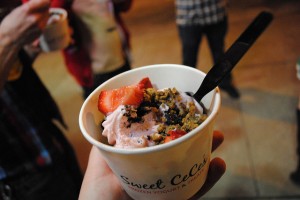 Brian Moore tells the Tennessean, “It’s always a concern that your company’s growing too fast. What’s great about our company is we have no debt. We also have a corporate team with vast experience in the restaurant industry. We’ve been beat up enough to be very cautious.”

“When we came in to Nashville there were two yogurt companies. Within a year, there were over a dozen yogurt companies. You’ve got to understand positioning, got to position yourself well. We have one of the lowest costs of entrance of any business, especially of this magnitude. Right now, most of them (competitors) are gone, and here we stand.”

“I don’t think there’s a better brand of yogurt in this country than what we have. The only thing we haven’t done correctly is to get out there and let people know about it. There’s only one way to do that, and that’s to be out there marketing. We’ve got a whole marketing plan set out to do that.”

Brian discusses future new products with the Tennessean, “I am a firm believer in innovation. However, I’ve had some really wise men tell me, ‘Never quit betting on a winning horse.’ We have a winning horse, so why get off this ride? However, we have a bucket list of things that are ready to come out at the appropriate time. Sometimes you have to hold back your playing cards and play the deck right and, at the appropriate time, play that card. So when the time is right to change something or bring a new product in, we’re ready.”

I personally can’t wait to see what Sweet Cece’s has up its sleeves.  I have a feeling things are about to get interesting.

Previous post: Looking Back on All My Item 19 (FDD) Financial Disclosure Reviews in 2011 - Over 50 Top Franchises

Next post: Coca-Cola Freestyle Coming to a Fast Food Franchise Near You (Video)