Schwab hopes to open 16 new offices (earlier plans targeted opening 20) in 2012, with three of them coming in the first quarter, and 40 more in 2013.  Charles Schwab received inquiries from about 1,500 potential franchisees since launching a marketing campaign targeting experienced financial services professionals last June. 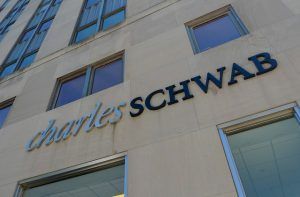 But some industry observers have expressed concern over Schwab’s franchise business model, which they claim make it tough for franchisees to compete.  Whereas independent representatives and advisers in other channels typically retain 80% to 100% of revenues, Schwab franchisees split revenues 50-50 with the company after the fifth year in operation.  Franchisees must pay their own operating expenses from their share of revenues, in addition to shouldering their own build-out costs, investments in technology, and the initial franchise fee of between $25,000 to $50,000.

Andrew Salesky, senior vice president of Charles Schwab’s Independent Branch Services, defends the Schwab franchise model:  “We haven’t made any significant adjustment in the terms of the franchising program. Many of our late-stage candidates are seeing this as an attractive opportunity.”

It’s premature to pass judgment on Schwab’s franchise model without first seeing how the initial branches perform. In the investment management business, having a name that people know and trust is an extremely valuable asset that could very well offset the steep royalty fees charged by Schwab. Schwab is one of the premier brands in the investment/brokerage industry so expectations are high that the name will bring in investors with multi-million dollar portfolios.

This reminds me about the high hopes of Mailboxes Etc. franchisees when the opportunity came to rebrand their stores as The UPS Store.  From first hand experience, I know that being associated with UPS creates headaches of its own (At first, customers could not understand that we were an independently owned business, with no control over package delivery issues that had nothing to do with our store).  Yet, at the same time, this is a very different animal because the premium attached to a trusted brand in the investment management business is probably much higher given the amount of dollars at stake.

I guess we’ll just have to wait and see how things shake out.  You can be sure I’ll be watching this story carefully as it unfolds.

Previous post: Want to Buy an Existing Business or Become a Business Broker? Check Out My Exclusive Q&A with Roger Murphy, CEO of Murphy Business and Financial Corporation