Franchising.com recently published a very comprehensive report on the growing use of mobile trucks in the franchise world.  Kerry Pipes, the writer of the article, did a terrific job discussing various ways food trucks are being used by franchisees, area developers, and franchisors to grow their respective businesses.  Here are some highlights:

Tom Jones, who operates four Cousins Subs restaurants and two mobile trucks in Milwaukee County, uses food trucks as an extension of his physical restaurants.  Tom parks outside various businesses and offices to serve the business lunch crowd Monday through Friday. Each of his trucks can sell anywhere from 40 to 150 sandwiches a day.

“It’s a simple operation. We prepare and prepackage the sandwiches in advance and are happy to take special orders from our customers if they call the morning before we head out,” Tom says. The trucks are equipped with all the necessary refrigerated storage space. He offers seven of his most popular sandwich offerings on the trucks and can accommodate special advance orders.

In Tom’s case, the advantage of the food truck is that it can be run with a single employee, who can simply finish off his hours at the store after the lunch run.

Toppers Pizza is experimenting with food trucks within the boundaries of a corporate-owned territory to determine the best ways to capture additional sales from a current trade area before suggesting it to franchisees.  Scott Iverson, director of marketing for Toppers, says, “In a mobile store we can offer our same products in smaller, trial-sized portions for a lot less, and they’re ready without having to wait to be delivered or picked up,” he says. And the truck serves as a constant reminder that there is a Toppers restaurant in the neighborhood.

According to Scott, “The big advantage the truck has over a regular store is that many of the fixed costs are one-time expenses (building and equipping it) rather than ongoing expenses (rent, utilities, etc.).” And since fixed costs are lower, the truck yields a much higher profit margin, approaching 30 to 40 percent on the best days, versus 17 percent at a traditional location.

Randy Wolken, master franchisee of Gandolfo’s New York Delicatessen in Dallas, is using food trucks as a market analysis and site selection tool. Originally, Wolken had planned to open traditional stores, but the mobile trucks made it possible to operate a Gandolfo’s franchise for about a third of the cost, while still generating good revenue numbers, with lower overhead, and the opportunity to identify strong market areas that might support a traditional location later on.

In addition, his truck is a cost effective way to introduce the Gandolfo’s brand to the Dallas market.


Aaron Weber of Tasti D-Lite (with three brick-and-mortar stores and one mobile truck in the Houston market) is utilizing mobile trucks primarily as a marketing tool. Webster has mostly used the truck to cater events throughout Houston, such as Christmas and holiday parties, fundraisers and church get-togethers, and local fairs and sporting events. He says he can offer up to 90 percent of his physical store menu from the truck.

“One of the added bonuses is that every time the truck is headed to an event we’re getting the effects of a giant mobile billboard,” Aaron adds. 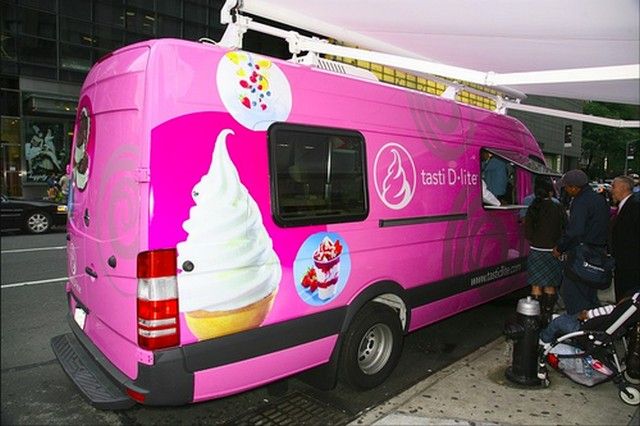