I used to live one block from the first Blo Blow Dry Bar located in downtown Vancouver’s chic Yaletown neighborhood.  Although I knew that the salon was quite popular, I didn’t realize that Blo is an emerging franchise brand, with a growing presence in the United States.  Thanks to a wonderfully written piece on The Globe and Mail, one of Canada’s national daily newspapers, I learned more than I ever wanted to know about Blo.  Here are a few highlights:

The Business Model:  No haircuts. No colouring. Just a wash and a blow-dry style (30 minutes of styling) for $35, instead of the typical $65 to $70 that others spend for a similar service at a full-service salon.  Every Blo Blow Dry Bar has a book with a menu of hairstyles, with cheeky names like Holly Would, Red Carpet, and Hunt Club. 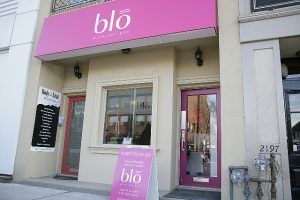 Blo’s History:  The idea for a blow-dry only salon came to 20-year-old Devon Brooks of Vancouver while studying at the London College of Fashion.  Devon’s mother, Judy, worked with her daughter to open the first Yaletown salon in July 2007.  Two additional Vancouver salons opened within the first year.  Around this time, Blo caught the attention of Toronto-based investors Ari Yakobson and Paul Spindler, who already owned a salon franchising company called Melonhead, which does children’s haircuts.  Within months, Mr. Yakobson finalized a deal to purchase Blo Blow Dry Bar for an undisclosed sum.

Blo’s Reach and Growth Plans:  Today, there are 18 Blo Blow Dry Bars, including eight in its new home base of Toronto, five in the United States, with two more due to open in Miami this month. Mr. Yakobson expects to sign agreements with 10 to 12 more franchisees within the next year, all in American big-city markets.  He would also like to open salons in the province of Quebec in Canada.

The Look:  A modern, club-like atmosphere, with magenta being the signature color. 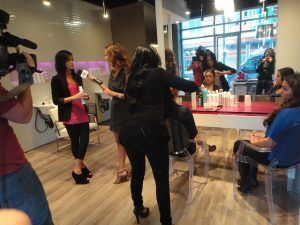 The Competition:  In the three years since the acquistion of Blo, the blow dry only concept has been copied by numerous independent operators and a similar franchise chain, called Drybar, has emerged. Launched in Los Angeles in 2008, Drybar now has 12 locations in California, Arizona, Texas, Georgia and New York, and is looking to expand to other cities. DryBar has gone for a less sexually suggestive image than Blo.

Franchise Cost:  The total initial investment to open a salon (typically between 400 and 1,000 square feet in size) is around $200,000, including the initial franchise fee of $25,000.  The royalty fee is 6% of gross sales, and advertising fees are variable.

Training:  Blo requires that all staff at a new salon attend “Blo U”. A senior Style Director teaches one class to the new staff, then handpicks one of them to be the Chief Style Boss, who receives additional training, which she then passes on to the rest of the staff.

Next post: What Frozen Yogurt Franchises Can Learn from Jamba Juice