Prospective franchisees looking to invest in a fast casual restaurant franchise at a lower cost just got another option with the opening of the new prototype unit of Famous Dave’s BBQ Shack in Eden Prairie, Minn. earlier this week.

Unlike other BBQ Shack units, this location has a smaller footprint, counter service for both dine-in and to-go orders, and a pick-up window designed specifically for guests who have pre-ordered their meals by phone.

The new BBQ Shack will offer the same great barbeque as traditional Famous Dave’s locations, but at a faster pace. 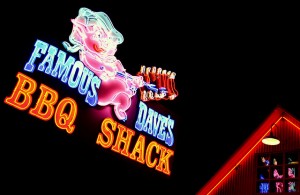 The company’s founder, Famous Dave Anderson, will also use this location to try new menu ideas and to experiment with new seasonings, sauces, and flavors.

Company executives think that this new fast casual prototype may ultimately boost the chain’s domestic build-out by 100 locations. “This is a significant opportunity for the brand to get into some second-tier markets and round out some others,” says Christopher O’Donnell, chief executive of Famous Dave’s of America Inc., during a conference call with analysts and a follow-up interview with Nation’s Restaurant News in July.

The counter-service concept appeals to many guests because they don’t have to add the 15- to 20-percent tip.  (The chain has seen recent growth in take-out and catering sales, versus its dine-in business.)

One thing that’s sure to appeal to prospective franchisees is the lower development costs.  Prior to the recession, construction of a full-service “smokehouse” design restaurant ran close to $3 million. In contrast, the new counter-service restaurant prototype that opened in Eden Prairie — located in a 3,000 sq. ft. space that was formerly a Boston Market — will cost about $650,000, Diana Garvis Purcel, chief financial officer of the company, told analysts in July.

O’Donnell said the prototype has the ability to do $1.5 million to $2.5 million in sales. In comparison, the average 2010 sales for Famous Dave’s company-owned locations was $2.56 million, while it was $2.74 million among franchised operations. As of the end of the third quarter 2011, the company owns 53 locations and franchises 131 additional units in 37 states.

Initially, the new prototype restaurant will produce a limited menu of core barbecue items it will sell: ribs, sliced pork, chicken and beef brisket, with a limited number of sides and salads. However, in the future, the chain might test an arrangement in which some counter-service locations are supplied, whether fully or partially, from a nearby full-service location.

Next post: How Franchisees, Area Developers and Franchisors are Using Food Trucks to Grow