What You Need to Know About Naked Pizza

I just love that line (destined to be a classic) from Jeff Leach, co-founder of Naked Pizza, taken from an in-depth feature article on the fast growing, buzz-worthy healthier pizza franchise published in the October 2010 issue of Entrepreneur Magazine.

For those unfamiliar, Naked Pizza serves “better-for-you” pies made with a high-protein multi-grain crust (available thick or thin) and rich in probiotics (similar to the ones found in frozen yogurt, but with the added benefit of being able to survive the heat of the baking process and stomach acids, allowing them to reach the lower digestive system where they need to be). 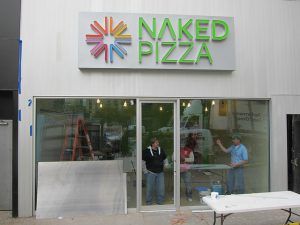 The company’s 26 toppings include all the usual suspects (pepperoni, sausage, chicken), plus a few options for the more adventurous eater (black beans, cilantro, white sauce). They use mozarella cheese made of skim milk, and pizza sauce without transfats, butter, added sugar, or high fructose corn syrup.

Naked Pizza has about half the calories of traditional pizza.

The billionaires refered to in the quote above are Mark Cuban, owner of the Dallas Mavericks, and Robert Kraft, owner of the New England Patriots.  Mark Cuban chose Naked Pizza to be one of two winners of his “Cuban Stimulus Package” in 2009, a competition to win his financial backing for a worthy business plan.  Mark also introduced the Naked Pizza team to The Kraft Group, who also agreed to invest in the business later that year. 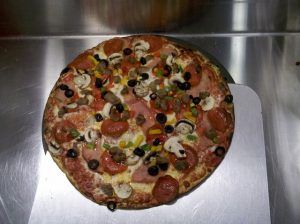 After landing Mark Cuban as an investor, the brand put up a billboard displaying its Twitter handle (at a time when that sort of thing was not yet common) and set a one-day in-store sales record in which 68.6% of sales came from customers calling because of Twitter. Naked Pizza’s story and its expert use of social media has since been featured in The New York Times, as a case study on Twitter, and in dozens of marketing, social media and technology blogs.


Email from Robbie Vitrano, another co-founder of Naked Pizza

I received this very interesting email from Robbie Vitrano in response to my request for more exclusive information on Naked Pizza for Franchise Chatter.  Here’s what Robbie had to say: 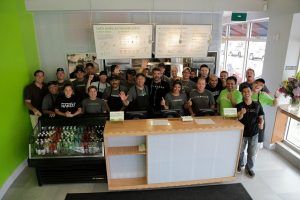 “In just over two years, with the backing of investors Mark Cuban and Robert Kraft (both in the top 200 of the Forbes 400), Naked Pizza has more than 500 stores in development from San Diego to Dubai.  Currently, 24 stores are open with an average of two new stores opening each month.  Recent openings include Denver and Manhattan.  Recent area development awards include Australia, Seattle, Vancouver B.C., Chicago and Philadelphia.

Our company considers purpose and profit inseparable and as such, only awards franchises to individuals or groups with shared value.  We were founded on the belief that fast food is both necessary and responsible for its role in society.  As such, we made one of the world’s most popular and unhealthy foods deliciously healthy, utilizing the $50 billion pizza industry as a Trojan horse to demonstrate that fast food can be part of the solution for the global epidemic of obesity and chronic disease related to diet.  We achieve that through precise operations, attention to unit economics, above average ROI for our partners, conscious capitalism across our stakeholder ecosystem and scale.

Full disclosure: This is hard. Some say impossible. It is NOT a passive investment even if you are a capable delegator. It requires vision and patience.

We welcome only serious inquiries from individuals with the resources and ethos to actively manage area development as well as likeminded investors and brands.  If your personal and professional purposes are aligned in using your talents and success to change the world, we welcome your call.  If not, please do not waste your time or ours with secondary questions regarding pro forma, etc.”

Previous post: Amit Kleinberger, CEO of Menchie's, Says: "We Are Going to Be the Next McDonald's"