Forbes’ search began with a free online survey. Entrepreneurs could nominate their own companies or be nominated by those familiar with their businesses (lawyers, accountants, p.r. professionals). Contenders had to be privately held, for-profit, stand-alone businesses.

Forbes teamed up with CB Insights, a New York City-based data firm that tracks investment in high-growth private companies. CB Insights has developed a complex software called Mosaic to help lenders and investors dole out capital more efficiently.  Mosaic mines data from 30,000 sources (from press releases and social networks to job boards and court filings) to come up with one score that measures a company’s potential.

Using the Mosaic score as a preliminary ranking, Forbes refined the list by gathering additional data via a second, more detailed survey. Forbes asked for annual revenue and the number of employees for 2008 and 2010, and estimates for 2011.

Forbes also considered the size of the addressable market, the strength of major competitors, the experience of the management team, any significant customers and strategic partnerships, the amount of outside capital raised and how much of the founders’ own money was on the line (the more the better). Then, Forbes spoke with representatives of each company to confirm the information and gain additional insights on their operations.

What makes Smashburger the Most Promising Company in America in the eyes of Forbes Magazine? 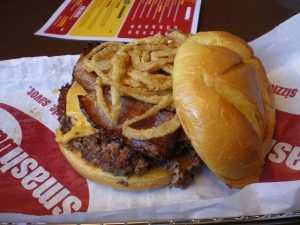 “In the midst of a severe recession, this Denver company will have grown to 143 locations (half company-owned, half franchised) and $54 million in annual revenue by the end of 2011. Another 450 franchise agreements are already on the books.”

“It begins with a ball of raw Angus beef, which a grill cook ‘smashes’ with a handheld steel mold onto a butter-brushed grill for ten seconds, giving the patty a caramelized sear to lock in the juices. Then come unconventional toppings like avocado, fried eggs and garlic mushrooms, as well 11 sauces, including chipotle mayo and spicy brown mustard. Buns? Everything from multi-grain to a pretzel roll.”

“Baby boomers, guys like me, really value good service and a good experience,” says Scott Hume, editor of Burgerbusiness.com. “I think they understand that.”

“New employees at company-owned stores make $9 an hour (minimum wage is $7.25) and earn bonus ‘Smash Cash’ for various achievements. If a line cook fills orders in under six minutes on average, he gets an extra 50 cents per hour. Store managers can earn monthly bonuses — up to 30% of their base salary — based on monthly revenues and customer reviews. Franchisees aren’t required to use this model, but many do.”

“Tom Ryan and David Prokupek met in 2003 through Rick Schaden, CEO of Quiznos, where Ryan was head of marketing; Prokupek managed the Schaden family fortune. Ryan and Prokupek joined forces in 2006, when Ryan decided he wanted to buy a burger chain and spruce it up; Prokupek signed on as an outside advisor.

When the pair couldn’t find an existing burger chain they wanted to buy, they decided to purchase (with $15 million in seed money from Schaden’s private equity group) a single restaurant, Icon Burger in Denver, and used it as their laboratory. They toyed with recipes and kitchen designs, testing ideas with customers every day. Finally satisfied, they opened the first Smashburger in Denver in June 2007. Within a month, the restaurant had a line out the door.

Eighteen months later, Prokupek became CEO, allowing Ryan to focus on the menu, which he beefed up with chicken sandwiches, a veggie burger and fare with local flavor. Prokupek engineered the expansion — sussing out new locations, standardizing the back office, signing up franchisees and tracking customer feedback.”

“In September, Smashburger announced plans to launch six locations in Kuwait, three in Bahrain and eight in Saudi Arabia, all franchised.  Not by accident, all the Saudi stores will be at airports, giving global travelers a taste of what’s to come. Ryan and Prokupek also have their eyes on Canada, the United Kingdom, East Asia and South America.”

HUMAN Healthy Vending, a company that sells healthy vending machines, made the list at #37.  HUMAN had $1.4 million in revenues (during the latest fiscal year) and 7 employees.  No other reason was given for their inclusion.