According to USA Today, Subway is set to announce tomorrow, Wednesday, a $2, six-inch sub promotion on their cold cuts and meatball subs for the month of December.

Subway experienced tremendous success with their $5 foot long sub deal and this ups the ante a bit, with 2 six-inch subs going for $4.  This promotion is intended to drive additional customer traffic in December, traditionally a slow time of year not just for Subway but for fast food franchises in general.  The hope is that customers who come in to avail of the offer will purchase additional items like sodas, chips, and cookies to round out their meals, or purchase 2 six-inch subs instead of just 1. 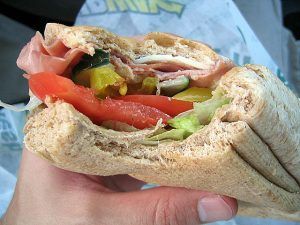 Subway was obviously inspired by the doorbuster deals of traditional retailers on Black Friday and the huge discounts offered by online merchants on Cyber Monday.  Black Friday spending this year was up 6.6% to a record $11.4 billion, according to market research firm ShopperTrak, while Cyber Monday spending in the U.S. reached $1.25 billion, up 22%, representing the heaviest online spending day in history and the second day on record to surpass the billion-dollar threshold, according to comScore, a firm that specializes in measuring digital data.

The margins of Subway franchisees under this promotion are expected to be modest at best, but it’s really not that much of a stretch from their $5 foot long offer.  This new deal applies only to cold cuts and meatball subs, suggesting that these 2 options have sufficient margins to handle the price cut.

Since this promotion is limited to the month of December, when regular customers typically ease a bit from their Subway fix, franchisees should still come out ahead.  And even if they don’t, it’s a great time to try something more aggressive in keeping with the deal-oriented theme of the season.  After all, the long-term success of fast food burger giants like McDonald’s is based in large part on their $1 meals.

Next post: Franchise Chatter Exclusive: Q&A Interview with Kerry Kramp, CEO of Sizzler ("The #1 Differentiator for Sizzler is the Concept Itself.")