A few days ago, a reader — and current TCBY franchisee — left an insightful comment for my post on the Top Frozen Yogurt Franchises of 2011.  In case you missed it, here’s what Anonymous had to say:

“Am I offended that TCBY didn’t make the numero uno slot on the list? No, but somewhat disappointed.

As a self-serve TCBY franchisee, I’m amazed by the number of self-serve frozen yogurt shops opening across the country. It’s endless. When is it going to stop? I think winter 2011-2012 will tell a lot about the future of the industry, especially for those shops based in colder climate, major metropolitan areas. Eventually, there will be a lot of carnage. No doubt. Ebay will be the ‘go to spot’ to pick up some good deals on used frozen yogurt machines. All the ‘mom and pops’ will not survive. No way.

Aside from that, the independents just don’t have access to the greatest product in the country. TCBY has been setting the bar for 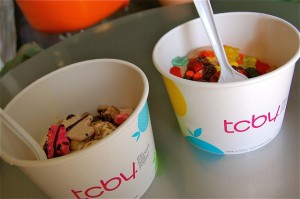 frozen yogurt for over 30 years, and it shows. Their product is by far the creamiest, tastiest, and most healthy. None of that powder-based, icy product with non-palatable aftertaste.

IMHO, Yogurtland has risen to the top because of the ‘new’ name and the price per ounce. Since TCBY took a backseat for a number of years, Yogurtland popped up out of nowhere and kinda took charge. Many people had forgotten about the TCBY name and moved on I guess. Well, TCBY is back. There is a new sheriff in town.

TCBY pretty much created the frozen yogurt industry back in 1981, and now, they must follow everyone else (i.e. self-serve model). Go figure. TCBY’s new store design is amazing. It’s bright, cheerful and inviting. The layout is superb. None of that cramped feeling you get a lot at self-serve shops these days. The customer service is first class. TCBY prides themselves on A+ customer service.

TCBY has a really bright future ahead, regardless of the competition’s expansion. TCBY is a first class operation. I wouldn’t have invested in a company with a weak and small track record and inferior product. 30 years is nothing to mess around with.” 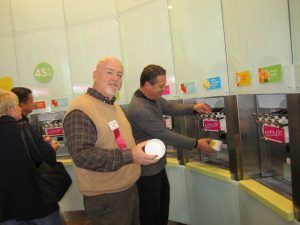 Because of that ringing franchisee endorsement, TCBY has been on my mind.  I wanted to dig deeper to find out if TCBY really offers a differentiated product and experience that would make them the frozen yogurt franchise to beat in 2012.  As luck would have it, I discovered a recent Q&A with TCBY’s CEO Tim Casey on QSRWeb.com, my new favorite restaurant industry website.

There were a lot of juicy bits in the interview, but one thing that really stood out was TCBY’s emphasis on differentiation.  Tim Casey believes that in a segement as competitive as frozen yogurt, “the more points of differentiation you create, the better chance you’re going to have at getting them (customers) to choose your brand.”

So, what is TCBY doing to stand out?

Another thing I found interesting was the healthy attitude of Tim Casey towards competition.  Saturation in the frozen yogurt 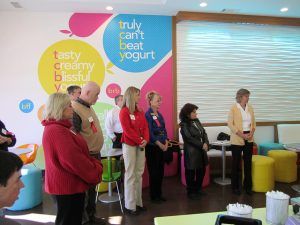 category is a concern of mine, but Tim has a slightly different take.

This interview reminded me that brand differentiation is not confined to a unique product line.  It can also mean a distinct philosophy or approach to doing business.  In the case of TCBY, on top of their Super Fro-Yo, their clever use of social media to learn what their customers really want, may very well be their long-term, sustainable competitive advantage.