Three years after the first Subway Café opened in an office building in Alexandria, VA, the concept has grown to about 20 U.S. locations, including new stores in downtown San Diego and Mission Hills, California.  The concept was the brainchild of longtime Subway franchisee Larry Feldman who opened the first Subway Café in response to a request from a landlord who was looking to serve tenants in an office building.

The Subway team is differentiating their cafés from their namesake restaurants via an upgraded coffehouse look, free WiFi and DirectTV, an expanded menu, and Seattle’s Best Coffee, including espresso drinks, lattes, and frozen blended beverages.

At a typical Subway Café, you’ll find chic lighting, flat-screen TVs, stuffed chairs, and a seating area equipped with electrical outlets for business people looking for a place to sit and work while they eat.   To achieve Subway Café’s signature industrial look with open ceilings and exposed duct work, franchisees can expect to shell out upwards of $250,000 per new store. 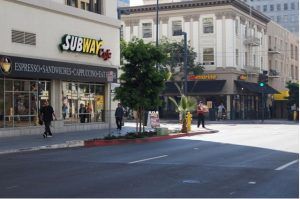 Subway Café features a bakery case filled with items not typically available in Subway restaurants, like a blueberry crumb cake, chocolate chunk muffins, a marble pound cake, and key lime danishes.  The Café menu features other unique items like panini sandwiches and a chicken Caesar salad, among others.  Menus vary by location.

With this new concept, Subway is hoping to gain market share in the hugely profitable breakfast daypart and lure coffee drinkers during their off-peak hours.  Subway launched their line of breakfast sandwiches two years ago, but they are far from being a major player in the ultra-competitive breakfast and coffee businesses.  Subway has overtaken McDonald’s in total number of U.S. locations, but the $32.4 billion in U.S. sales achieved by McDonald’s last year far exceeds Subway’s $10.6 billion (Starbucks comes in at $9.1 billion), according to Technomic Inc.’s 2011 Top 500 chain restaurant report.

Subway is taking a conservative approach in rolling out their café concept.  Even though the first unit opened three years ago and there are about 40 additional stores in development, the company anticipates keeping Subway Café in test phase for quite some time.  Cindy Kopazna, who oversees tests and special projects as part of Subway’s research and development team, said in a statement:  “We’re always cautious whenever we’re looking at something that will cost franchisees additional investments. This idea is more development driven than product driven, but with the combination of our brand strength and having an upscale décor and more offerings, it’s very attractive for many.”

I’m not convinced that Subway Café is a breakthrough platform similar to the McCafé, primarily because Subway is not developing their own line of coffee.  Instead, they’re relying on Seattle’s Best to supply their core product.  At most, this is a co-branding opportunity, not a game changer.  The other menu items are also ho-hum — pretty much  what you’d expect to find at any other independent or franchised coffee shop.

Subway doesn’t have the same product development chops as McDonald’s or Starbucks because their priority has always been on operational efficiencies, which is not a bad thing.  I admire the company for putting the financial performance of their franchisees ahead of any breakthrough product introductions or new concepts.  The downside is that they probably won’t be able to take a quantum leap in their business because they lack the creative DNA of their competitors.

McDonald’s and Starbucks have nothing to worry about, for now.  In my view, Subway doesn’t have all the ingredients in place to make this new concept a game changer.

Previous post: What Pinkberry, Red Mango and Other Frozen Yogurt Franchises Can Learn from McDonald's